Do Amish have genetic disorders?

Some Amish and Mennonite individuals struggle with genetic conditions little-seen in the general population.  Certain Amish populations also exhibit diseases and conditions seen elsewhere, but at a higher rate than the general public.  Amish and related groups have been assisted by outsiders in treating genetic problems.

What genetic diseases are common among Amish and Mennonites?

Amish and Mennonites exhibit certain rare diseases uncommon in other populations.  These include Ellis-van Creveld syndrome (a type of dwarfism), glutaric aciduria, Crigler-Najjar syndrome, and maple syrup urine disease.  Some illnesses are so uncommon that they are unique to these communities (such as Troyer Syndrome or Amish lethal microcephaly), or rarely seen elsewhere.

Some groups of Amish may exhibit diseases more likely to be seen in the general public, but at a higher rate.  These include cystic fibrosis, muscular dystrophy and deafness in some communities. 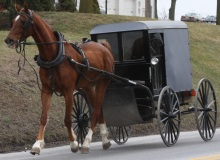 Lancaster Amish descend from a small group of 18th-century immigrants

These two factors combine to create a “founder effect”.  A founder effect means that genetic variation is lost over time due to a limited number of founding individuals.  Certain recessive traits found in a small founding population are amplified in future generations.

Amish face a particular challenge.  The Amish way of life and culture, requiring members to restrict use of technology, live in a generally austere manner, and master a specific dialect for worship and day-to-day communication, makes it particularly difficult for non-Amish to join the Amish church.

Additionally, most  Amish tend to focus religious energies on their own sizeable families, as opposed to proselytizing others.  These two factors make it unlikely for outsiders to join the Amish, a process by which the Amish genetic pool would otherwise be deepened over time.

Help for Amish and Mennonites with hereditary illnesses

Amish and outsiders sympathetic to their challenges have focused on early diagnosis and treatment of genetic illnesses in their communities.  A number of institutions assist Amish and Mennonite families afflicted by inherited genetic disorders. 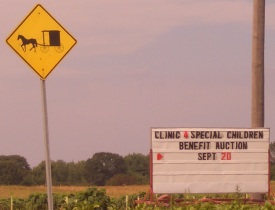 The Clinic for Special Children Benefit Auction is held annually in a number of places, including Leola in Lancaster County

The best-known is The Clinic for Special Children, located in Strasburg in Lancaster County.  The Clinic, run by Dr. Holmes Morton, operates thanks to contributions, proceeds from annual benefit auctions taking place in Pennsylvania and Ohio, and by charging relatively small fees for services.  The Clinic for Special Children also treats children from outside the Amish and Mennonite community and from around the world.

Other medical institutions, such as the Akron, Ohio Children’s Hospital and the SUNY Upstate Medical University accommodate Amish and Mennonite patients, as in the case of cystic fibrosis treatment, for example.

Researchers fairly frequently enlist Amish help in conducting genetic studies, such as recent research on the presence of a “fat gene” in Amish individuals.  Amish, increasingly aware of the benefits genetic research can bring to others and themselves, generally participate in large numbers.

Intermarriage across Amish society may be another solution to genetic issues, as Amish in different communities exhibit different bloodlines.  However, differences in practice between Amish affiliations may prevent such intermarriage from occurring.  Marriage between communities such as Lancaster County and Holmes County, Ohio, occur only rarely.