Sitting on the lawn around the firepit last week with some Amish friends, talk turned to ‘White’ Jonas Stutzman, who once lived just a few miles away.  Stutzman was one of the first Amish settlers in Holmes County.  He was also one of the oddest. 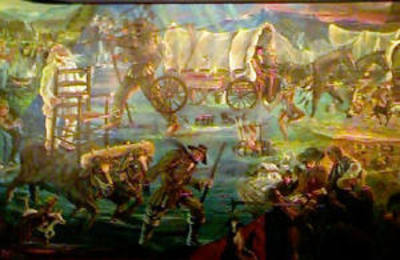 ‘White’ Jonas is portrayed in a local attraction, Behalt–a huge cycloramic painting of Anabaptist history, done about fifteen years ago by a Catholic German artist.  The pioneer Amishman got his nickname from a habit of only wearing white clothing, a result of one of his visions.

Stutzman had some odd ideas.

One of them was his prophecy of Christ’s return.  Steven Nolt in A History of the Amish explains that Stutzman published a booklet announcing his revelations and warning all to repent, for church leaders to stop observing communion, and to purify themselves for the Lord’s arrival, which Stutzman claimed would occur in 1853.

The booklet was published in English rather than German.  Nolt speculates that this was done in order to communicate with a wider audience. 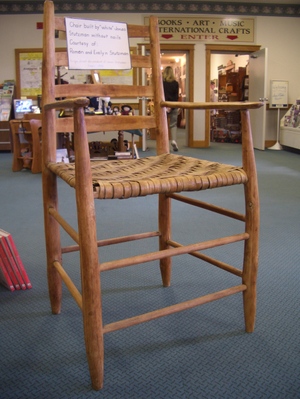 Stutzman even prepared a wooden chair for Christ’s return.  It sits in the center of the cyclorama room.  Since we should always ‘hold Christ above us’, Stutzman made the chair larger than an ordinary one.  As picture-taking is not allowed inside the cyclorama, the friendly folks at Behalt removed it to the lobby so that I could get a photo. 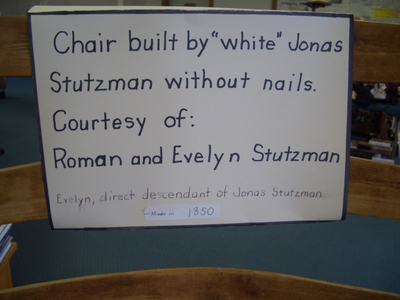 My Amish friend also claimed that Stutzman had an aversion to wheels.  Checking with the helpful people at Behalt seemed to confirm this.  A Mennonite lady who’s worked there many years felt that it may have had something to do with a Biblical connection of wheeled travel with chariots of war.

Wherever he got the idea, apparently it held even after his passing.  Upon death, Stutzman was carried miles rather than being carted to his final resting place.

She also wanted me to understand that besides being an eccentric, Stutzman played a part in easing differences among the Amish.  When local progressives wanted a meetinghouse, Stutzman donated land for them to build one.  The land is still in this particular church’s possession, though the old building has been torn down and a new one built. 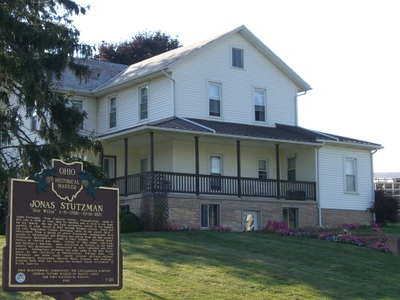 Nolt summarizes:  ‘Although the Amish rejected Stutzman’s apocalyptic teaching, he remained a member of his church all his life, and most of his children joined the Old Order Amish…Said one Amish historian, “His peculiar views and dress were not seen as a threat to anyone, for he never had any followers.”  His unusual life grew out of honest conviction, not a spirit of rebellion.’

(Source:  Steven M. Nolt’s A History of the Amish, Revised and Updated).