A couple more articles caught my eye over the past few days.  Many people have likely already seen the article from yesterday’s NYT on Amish farms damaging the Chesapeake Bay through farm runoff.

This issue has existed for a number of years, but this was interesting to see written about for a couple reasons:  one in that it offers another example of an Amishman accepting government aid.  Lancaster farmer Matthew Stoltzfus has taken government aid to build a manure pit.

Going against taboos against receiving government assistance, some Amish have occasionally participated in government programs.  This has happened in a few instances recently, most notably in northern Indiana, with some Amish made jobless by the downturn in the RV industry electing to receive unemployment payments. 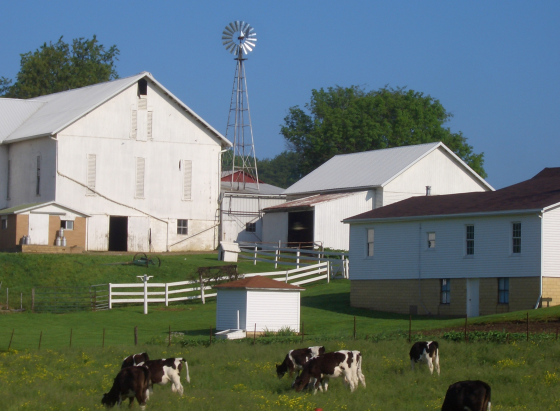 Another point of interest is that by the sound of the article, the government seems to be intent on taking some action now, and with Lancaster leading the list of counties contributing pollution, seem to be lining up the Amish in their sights.  It will be interesting to see to what degree the Amish will be regulated and the implications of any eventual government mandates.

I believe that if Amish realize they are causing damage to others by their practices, they would be willing to cooperate to reduce their impact.  A local consulting company seems to be helping with the educational aspect.  The article focuses on the Amish, but I also wonder to what degree the Amish should be blamed, as they are not the only farmers in Lancaster County, or the region for that matter.  Matt from CT left an interesting comment in yesterday’s post on this issue:

If you confine your question solely to individual facilities, I have no doubt if one went looking they could find an Amish farm that causes more water pollution then a well run pork factory. Likely you could even keep a fairly even count going even measured by total pollution.

If you look at the total system the answer becomes less clear, because then you also start looking at midwestern corn farms and how that corn is transported to feed pigs in North Carolina.

You can manage wastes effectively on small, mixed system farms. However some of the changes do impact both economic and aesthetic concerns — by fencing off streams and ponds and letting them grow into brushy / tree lined areas you increase the work for the farmer (who now needs to water pastured cattle, a significant proposition if you don’t have electric powered wells), you reduce his available acreage for forage (in a place like Lancaster County where space is at a premium already, a big issue), and you also impact the what most Americans view as bucolic scenery (don’t forget Lancaster County is built as much on tourism as anything else).

Unlicensed medical practitioners among the Amish

The second article that caught my eye, in the East Central Illinois News-Gazette, addressed an unlicensed individual posing as a chiropractor and treating Amish in Illinois, as well as in other communities.

On the one hand employing unapproved forms of treatment can be potentially dangerous.  On the other, based on his apparent popularity, it seems like this individual was probably providing a service that people valued.

Recently in Ohio an Amish friend spent a lot of time talking about an individual from out of state who sounded similar to this one.  For $250, he would perform a special treatment on the “atlas vertebra”.  Apparently one procedure was enough to rid a body of ailments.  A friend of his had gone to be treated in the hopes of alleviating daily migraines, with apparent good results.

Amish tend to put more stock in remedies others may consider suspect.  In some cases, however, there may be something to these practitioners and treatments they offer.

(Finally:  Magdalena has an interesting post up on yesterday’s controversy over Amish food.  Head over to her blog Anglican, Plain for a no-holds barred take on the issue, one which is actually somewhat related to the farm run-off complaints against the Amish.)