Do Amish women have rights?

Amish women may seem oppressed, but are esteemed in Amish society

Amish women play a significant role in the Amish household and by extension Amish society.  Women do not take on the same roles as men in Amish society, a fact that can disturb non-Amish observers of the culture.  Amish base their Christian communities on Biblical principles, meaning a more traditional calling for women.

However, the perception of the Amish woman as necessarily oppressed is one which ignores the reality of her position, as well as Amish values.

Amish women play important roles in the household and community.  Among other roles, Amish women are:

Amish women are esteemed in Amish society for the contribution they make to home and community.  They are mothers, managers of the household, and play an important role in maintaining communal ties.  As the home is considered in some ways the center of Amish life, her role in maintaining it is highly important.

Female Amish roles have in fact evolved as Amish have moved from agriculture to entrepreneurship and day labor.  In recent times, with Amish men spending more time away from home in non-Amish working environments, Amish women may be taking on a more traditional role of housewife.

In the agricultural model she would be expected to help out in farm tasks, taking on certain “male” roles, as well as running the household.  Some Amish women with men working away from the home have had to take on the role of disciplinarian more so than in the past.

Amish women have the right to vote in Member’s Meetings and also to nominate candidates for church ministry.  However, they do not serve in that same church leadership.

Amish women typically take at least a nominally subservient role to their husbands.  In public an Amish woman will normally defer to her husband’s decisions.  In private, however, the reality is that the Amish woman is highly influential, and Amish husbands often yield to their wives’ wishes, particularly on household matters.

Amish men typically consult wives on important decisions concerning the family, and in business decisions as well.  In practice, an Amish woman’s wishes can determine the course of a business or influence a move to another community.  As one Amish-raised woman quipped, “the man may be the head of the household, she is often the neck.”

Amish females often work as waitresses, teachers, or hired household help while single.  But once married, they are typically expected to remain in the home, and almost always do so when they become mothers of small children.

Teaching is a common profession for unmarried Amish women

There is evidence that Amish gender roles have shifted in recent years.   Some Amish women run their own businesses, and in some cases their husbands even work in the business. She may be for all intents and purposes the owner, though on paper the couple may be listed as co-owners.

Typical businesses owned by Amish females include quilt-making operations, market stands, and small retail shops.  Amish women may be more likely to work away or to go into business once children have grown up.  A few Amish women, usually unmarried, even work in “man’s jobs”, such as in manufacturing plants.

Yet the expected norm for the vast majority of Amish women is to contribute to the household at home.  Her labor and expertise play an important part in the household finances, from the food produced in the gardens she tends, to the secondary roles she might take on (ie, bookkeeping) in assisting in the operation of a business.

Though there is not a lot of hard scientific data, evidence suggests there is a generally high level of contentment among Amish women.

Hurst and McConnell’s in-depth survey of Ohio Amish women led the authors to state that “The women generally voiced deep satisfaction with their roles.  All believed strongly that men and women are meant to have different roles to play in life, largely because of perceived differences between the sexes” (Paradox, Hurst/McConnell, p121).  Of course, certain individuals struggle more than others to find satisfaction in the traditional Amish role.  Though it is rare, some may even leave the community as a result of failing to find appropriate avenues for self-fulfillment. 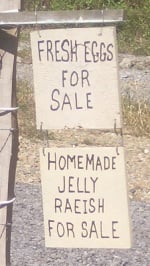 Amish women tend to have a strong sense of identity, are highly respected in Amish society, and gain satisfaction from playing productive roles within Amish society.  Amish women “take pride” in a garden well-tended, well-behaved children, complements on the home and food, and in handiwork appreciated by others.

Though feminists may have problems with what they perceive as the Amish woman’s position, others have noted that Amish women seem to have achieved a degree of contentment that many modern feminists continue to pursue, with less satisfactory results (Conundrum, Olshan/Schmidt).

“Amish Women and the Feminist Conundrum”, Marc Olshan and Kimberly Schmidt; found in The Amish Struggle with Modernity, eds Donald B. Kraybill and Marc A. Olshan