If you knock on a random door in any of a number of Amish communities across the country, there’s a decent chance the home might contain a set of books called the Family Bible Library.

Originally published in 1971, it is a perennial hit among the Amish, who appreciate the vivid illustrations, easy-to-understand text, and solid scriptural reference.  For that matter many Amish have Bible story books for their children in the home. 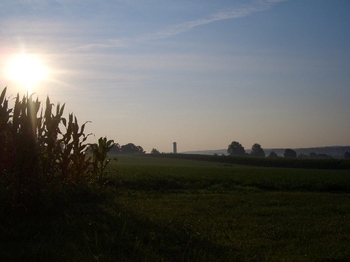 I’m selling these among the Lancaster Amish this year, as I have in other communities in years past, and it has been a hit here as well.  I happened to get what I believe was my most enthusiastic reception ever yesterday, when one mother nearly shouted when I pulled out a sample book of the set.  ‘I wish my mother could see this’, she said.  ‘It brings back so many memories’.

Many Amish adults fondly recall using these and other Bible story books during childhood.  I look at Bible story sets like this and others as fulfilling a role for the Amish that television now does for the modern family.  It’s a focal point for family time, an activity to share during down time, at the end of the day or on the weekend.

I realize that’s a crass comparison–I doubt there’s the same amount of spiritual benefit in the television diet of the typical American family–yet I mean it in the sense of families coming together.  Work, church meals, reading–it’s one of those things the Amish do collectively as a form of recreation just as we go to the ballgame or check out Spider-Man 3 on family night out at the cinema. 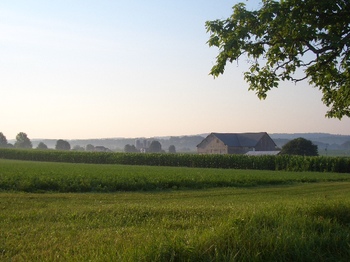 I feel very fortunate to be able to do this job again this summer.  It has given me a chance to see a cross-section of Amish America and to gain friends and acquaintances whom I’d otherwise have never had.

At the same time it can be difficult.  The Amish get a lot of salespeople–some unscrupulous and pushy–and in turn some of the Amish can be rude, just like any other people.  When I sell, I am extremely laid-back and non-pushy.  I have a policy of always treating ‘no’s’ the same as the ‘yes’s’–with courtesy and good humor–but it can still be tough.

But I feel good knowing that people appreciate what I’m doing.  That more than makes up for the refusals and long hours.  That and everything I get to see and learn.  (A little example–this week I’ve been on more dairies than in any other community I’ve visited–Lancaster has a higher percentage of them–and now I know how to pick out a Hereford cow and how many pounds of milk a milk truck can hold–62,000 in this particular case.  And I’ve begun to perfect what I call ‘running the gauntlet’–making it from one end of the barn to the other, in between two rows of 4 dozen cows being milked–all of whom happen to have the wrong end pointed in your direction.  Yea, I’ve already taken a couple of indirect hits but that’s what the Handi-wipes in my truck are for). 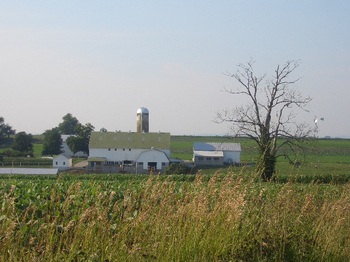 It’s especially worthwhile when you run into the reaction that I did yesterday.  To know that families often pass the sets down to the next generation, and just seeing kids’ reactions when I bring the books back at the end of the summer is almost worth it by itself.

Along the way I’ve also noticed that some of the Amish have uncanny memories.  The Amish as a whole tend to make careful markings of events and happenings, often inscribing names and dates in books and on gifts upon receiving them.  Amish genealogies are extensive and well-documented.  Amish homes often have framed embroidered hangings noting marriage dates and listing birthdays of all the children in a family.

Last summer in Elkhart County, Indiana, I ran into a bishop who had purchased the Family Bible Library set around 36 years ago, in what was likely the first year it was published.

He recalled the day the student salesperson who sold it to him delivered it–a delivery date which happened to fall just after the date of the funeral of one of his sons.  The bishop recounted how the kid was moved to tears when learning of the boy’s passing.

A few other Indiana Amish uncannily recalled the name of another student who’d sold them sets back in the early 80’s–without having to think twice about it.  All of them seemed to remember him fondly, as an animated, funny fellow.  The guy must have made an impression–I can hardly remember the name of three people I met last week.

Yea, I’ve definitely got a cool job–this past week I visited a ‘non-puppy mill’–a couple English bulldog moms and seven of the cutest and happiest-looking (and at $1450 a pop, most expensive) pups you’ve ever seen, stuffed myself with homemade Amish pizza twice, and learned ‘boy it’s really hot’ and ‘come eat’ in PA Dutch.  And I got a few Amish guys speaking some Polish in return.

After a few more weeks of this, I will be returning to Holmes County, Ohio, for an entirely different experience, to work in an Amish shop.