The Amish approach medical care differently.  They often make use of institutional medicine and modern treatments, though many Amish prefer natural methods and traditional remedies.

Amish are generally unlike some Christian denominations who may refuse certain medical care out of hand due to religious belief.  However, religious reasons as well as cultural values may factor into some medical decisions made by Amish.  The Amish approach to medicine can also vary by affiliation and community.

Amish use of doctors and hospitals varies

In An Amish Paradox, Hurst and McConnell detail use of institutional medicine among the various Amish affiliations in the Holmes County, Ohio settlement.

Hurst and McConnell report that Amish are generally less likely to undergo annual checkups or engage in preventative care.  A reluctance to go to the doctor can result from various factors, including  a desire to avoid needless medical costs, a generally higher pain threshold (as reported by doctors treating the Amish) and a failure to understand the importance of, or reasons for professional treatment.

The authors also note that more conservative Amish are less likely to seek medical care, and more likely to delay treatment, especially when physical symptoms are absent or minimal.  The Amish (who do not carry commercial health insurance) cover medical expenses in various forms, often by contributions from the community, or through limited community-administered plans.

At the same time, John Hostetler points out that Amish may go to great lengths to achieve relief for physical ailments, and the issue of the health of others in the community is often of great concern (Amish Society, Hostetler pp322-5).  It is not uncommon for Amish to travel great distances in seeking medical treatment, to out-of-state clinics or even to Mexico.  However, Amish may see costly life-prolonging care as excessive and unjustified in terminal cases, and often opt to let a life expire with dignity.

The Amish relationship with medical professionals

Amish generally appreciate doctors whom they can trust and who show an understanding of Amish culture and belief.  Hurst and McConnell report that medical practitioners who deal with Amish report that they are generally good patients, though a knowledge of Amish ways, and particularly the Pennsylvania German language, can help  in the doctor-patient relationship.  Doctors with an Amish background may be particularly valued by Amish.

Doctors may make home visits in Amish communities, as in the case of the well known doctor Elton Lehman, described in the book House Calls and Hitching Posts.  Lehman gained the trust of his patients and served the Amish community in Wayne and Holmes counties for over three decades, delivering babies and caring for injured and sick Amish people.  Other facilities catering to an Amish clientele have made accommodations accordingly.  The Amish House of Pomerene  Hospital in Millersburg  provides a Plain environment for Amish visitors.

The Amish House, in Millersburg, Ohio, provides a Plain setting for Amish patrons of the adjacent hospital

In addition to doctors, Amish frequently make use of chiropractors for “readjustments” and to deal with other back and joint ailments.  John Hostetler surmises that this openness to chiropractors may be “possibly because chiropractors spend more time talking with their patients and also provide more body contact” (Amish Society, Hostetler, p325).

Clinics catering to Amish and Plain people have also been set up in some communities.  The most well-known is the Clinic for Special Children in Strasburg, PA, which treats rare genetic diseases seen mainly in Amish and Mennonite communities.

Amish have worked together with medical professionals on a wide scale, particularly in genetic studies.  Amish are seen as a near-ideal community for such research, due to the relatively closed nature of Amish society as well as the substantial genealogical records kept by Amish.  Amish generally cooperate with health initiatives that can be seen as beneficial to others within their own community, or outside of it.

Generally, Amish immunize their children, particularly members of more progressive orders, though at rates lower than the non-Amish public (Paradox, Hurst and McConnell, p228).  However, a significant percentage abstain for various reasons, including distrust over the safety of vaccinations, associations with autism, and on religious grounds.  Amish have occasionally run into legal issues with the state, both for their reluctance to allow certain treatments they see as unnecessary or harmful, and for instances of Amish illegally administering medical treatment.

Some Amish rely on natural and traditional treatments

Amish often favor non-clinical approaches to health care and medical treatment.  Many Amish prefer natural herbs and medicines to artificial treatments.  Dietary supplements are popular among Amish, and these as well as other treatments may be advertised in Amish publications such as the Budget, and sold directly by the Amish themselves.

Some Amish even operate herbal medicine stores, as is the case in a few settlements in Indiana, for example.  Others may deal in dietary supplements in order to make side income (through multi-level marketing, for example).  Amish may feel more comfortable with remedies that come from nature or those that are traditional and long used and approved of by parents and predecessors.  While no Amish are certified as medical doctors (due to a cultural limitation on formal education), a few Amish do medical treatments themselves, such as chiropractic or podiatric treatment.

In many cases, Amish prefer to give birth at home.  This is done from a cost standpoint, as a home birth with a midwife, or sometimes a doctor in attendance costs much less than hospital care.  Also, Amish appreciate the at-home setting as opposed to the clinical and foreign nature of the hospital.  A first birth is more likely to take place in hospital, with subsequent births having a greater chance of occurring in a non-hospital setting.  Birthing centers have been constructed in some Amish communities. 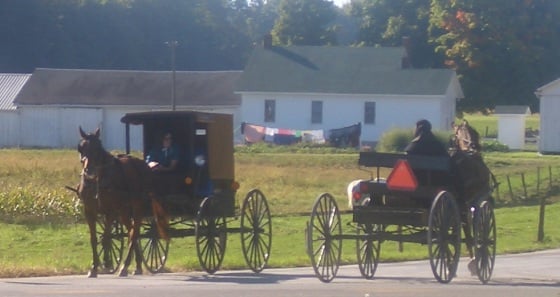 Amish use of natural methods is based in a reliance on traditional practice and belief, some of which can come across as rather unscientific.  For example, Karen Johnson-Weiner details the practice of “pain-pulling” found in some conservative Amish communities, which relies on the physical contact of healthy individuals to extract the pain from an afflicted person (New York Amish,  Johnson-Weiner, pp 69-70).

Others may rely on folk practices such as powwowing or sympathy curing, or traditional remedies, such as teas and tonics, soaking wounds in kerosene, or the wearing of copper rings to treat arthritis.  Traditional methods of healing are more frequently seen in conservative Amish communities.

Factors such as cost, an understanding of reasons for treatment, the attitude and approach of the physician, and previous effectiveness of traditional treatments can all influence the decision of Amish to seek professional medical help.  The likelihood of an Amish individual visiting a doctor can also be influenced by the particular affiliation and community he or she belongs to.

“Health Care”, Gertrude Enders Huntington, The Amish and the State