Where are Amish babies born?

While many Amish have children in hospitals, some opt for home birth and local birthing centers

Amish families have on average 6-9 children (depending on the community). The question of where to bear them is an important one. Some Amish prefer having children at home, or in special birthing centers.

Amish have children at home and in birthing centers for numerous reasons:

Amish often prefer the at-home setting to the clinical environment of a hospital. Traditional Amish groups tend to favor home births over hospital births. In An Amish Paradox, Hurst and McConnell cite a survey of an Ohio community which showed that 59% of Old Order and New Order Amish births took place in hospital (as compared to 84% of non-Amish births), while less than a fifth of Swartzentruber Amish births did. 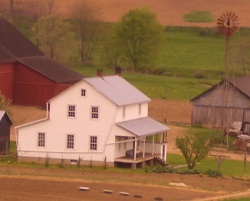 Amish appreciate midwives and doctors who understand Amish culture. The home setting is less stressful than that of a hospital. Some Amish appreciate the chance to welcome new life into the world in the security of home.

Midwives who assist in Amish births may be Amish or from outside the community.  Midwives may offer pre-natal care for an expectant mother. A baby may be born in the midwife’s home, which will be equipped to assure the mother care and comfort.

Amish have built birthing centers in Amish communities as well, such as the Mount Eaton Care Center in the Holmes/Wayne county settlement in Ohio, which is staffed by doctors and trained midwives. Others of varying standards are found throughout this settlement.  Amish who patronize them also appreciate their proximity, as opposed to hospitals which can be located relatively far away.

Home delivery has been controversial in some instances. Hurst and McConnell note that some medical professionals criticize the varying levels of care found among Amish-patronized birthing and midwifery centers.

Controversy has also centered around the licensing of midwives. Cases in Pennsylvania and Ohio have been brought against midwives for practicing without a license and for illegally administering prescription drugs. Amish have come out in support of midwives under prosecution, as happened in 2007 in a controversial case in Pennsylvania.

The use of midwives and birthing centers varies among Amish, with more conservative groups generally favoring the practice. Hurst and McConell note that an Amish couple’s decision of where to have children depends on a number of factors, including cost, beliefs, and proximity.

“Health Care”, Gertrude Enders Huntington, The Amish and the State