Amish in the Jungle?

A link (no longer online) to some nice photos of Anabaptist-related peoples in South America, by Jordi Busque. 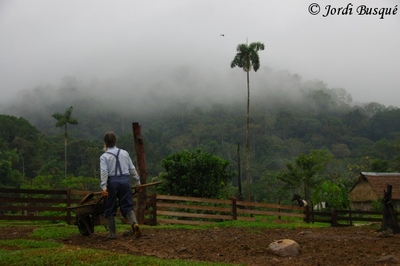 Jordi says that the family in An Amish family in the jungle moved to Bolivia from Tennessee in the mid-90’s.  Apparently they identify themselves as Amish, and Jordi adds that there is another family like them, about an hour’s walk away.

Is this family in fellowship with any established Amish settlement?  Some aspects of clothing and appearance compare to Amish styles in the US, though some of the women’s coverings are more reminiscent of other Anabaptist-related groups, and is the father wearing a moustache?  Hard to tell.

A very interesting case.  Anyone with further info is invited to comment. 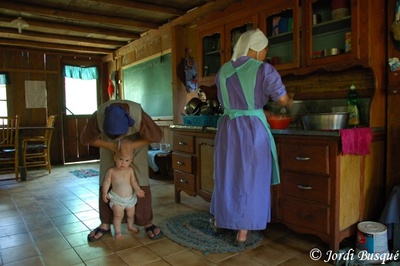 In Settlements that Failed, David Luthy describes the first Amish attempt at settling south of the border, a short-lived settlement near Nuevo Leon in Mexico in the 1920’s.

The next serious attempts came in the 60’s, with small communities in Honduras and Paraguay.

Over time, these groups disintegrated.

Most of the Hondurans returned to the US in the late 70’s.  The ones that stayed behind eventually joined the car-driving Beachy Amish.

Amishman Joseph Stoll detailed the travails of the Honduras group in his firsthand account, Sunshine and Shadow.

The remnants of the Paraguayan group, most of whom left for the US in the 70’s as well, ‘use no motor vehicles, worship in Spanish and English, and have built a meetinghouse.  They have no formal connection to the Amish’ according to Steven Nolt in A History of the Amish.

With roots reaching back to Mennonite groups in Russia, today they are mostly found in Mexico with related settlements in Canada and South America.  In matters of faith and lifestyle they are in many ways similar to the Amish, though as the photos show, their dress is decidedly different.

Thanks Jordi, for sharing the great work.