This one goes back a couple years, but really surprised me when i first found it.  An English-language Polish weekly, the Warsaw Voice, reported back in 2000 that a few families, apparently of an Amish or Mennonite persuasion, had settled in a village not far from the capital.

The arrival of the families apparently caused quite a stir: one villager ‘ran from house to house shouting that the Jews had come back’, in reference to the similarity of the newcomers’ dark garb and beards to that of pre-war Jewish. 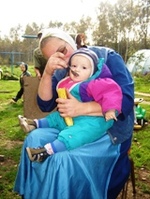 At the time of the article’s writing, only one family remained.  Two others had returned to the states.  The only Polish convert to the group had disappeared.

Just who are, or were, these ‘Amish’?  Could they be Beachy Amish, who also have settlements in Europe in places such as Romania and the British Isles?  They don’t seem to have an association with any of those groups though.  A random offshoot?  That happens sometimes.  The last name of the remaining family, Martin, is rarely seen among the Amish, being a typical Old Order Mennonite name.  The other two families bore traditional Amish monikers.  The head of the last family, Jacob, uses both electricity and a car, and is reported to associate with Evangelicals and Pentecostals.

Puzzling.  Like the ‘Amish in the Jungle’, another unusual case of Amish or an Amish-related group outside of their ‘natural habitat’.