Who were the Anabaptists?

The Anabaptists were the predecessors to the Amish, Mennonites, and a number of other Christian groups

The Anabaptists were a religious group which developed a set of beliefs counter to the dominant Catholic Church.  Anabaptist beliefs also set them apart from Protestant reformers.

When and where did the Anabaptists begin?

The Anabaptist movement began in Zurich in Switzerland in 1525 as an offshoot of the Protestant reformation.  Protestant reformers such as Ulrich Zwingli, despite his impetus to reform, nonetheless felt that the church should subordinate itself to the state in reform matters.  His students Conrad Grebel, Felix Manz, and Georg Blaurock objected to this approach, feeling the church should be independent of state power.

A particular sticking point for these early reformers was the issue of infant baptism.  Despite efforts to reach a compromise, Zwingli and the reformers were not able to resolve their issues.  In January of 1525, the Zurich City Council instituted legal requirements of infant baptism, with fines for those who failed to do so.  In response, Grebel, Manz, and Blaurock re-baptized each other and their followers in secret at Manz’s home a few days later on January 21, 1525, and began the Anabaptist movement.

What did the Anabaptists believe?

Anabaptists believed in a number of  tenets which conflicted with Church and state authority, including adult baptism.  The name “Anabaptist” was originally a derogatory name meaning “rebaptizer”.  Anabaptists also believed in non-resistance, which prevented them from serving in state militaries.  Anabaptists subscribed to a number of other doctrines, including social shunning for excommunicated members. 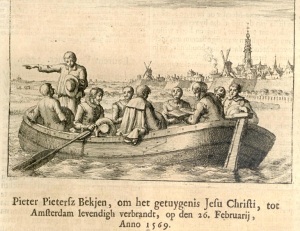 Anabaptists meeting on a boat

The State Church saw the Anabaptists as a threat.  Infant baptism was a means of controlling the populace, as children were entered into state records.  Anabaptist demands for adult baptism and other changes to the state church, including challenges to priestly authority, were seen as upsetting the established order.  Anabaptist refusal to bear arms was considered seditious and threatening to security in the face of external threats.

As a result, both Protestant and Catholic authorities persecuted Anabaptists, capturing, torturing, and killing many over the ensuing decades.  The book Martyrs Mirror, by Thieleman J. van Braght, is an account of the martyrdom of numerous Christians, including early Anabaptists.  The Martyrs Mirror is well-known among Amish.  The martyr tradition of Anabaptism influences the way that Amish and other descendants view their place in the world today.

Which groups fall under the Anabaptist umbrella?

The Amish and Mennonite traditions eventually emerged from the Anabaptist movement in the late 1600s.  In addition to the Amish, numerous other groups including Mennonites, Hutterites, and Brethren can be included as descendants of the Anabaptists.  The term Anabaptist is still used to describe these groups, many of which still share similar doctrines of non-resistance, adult baptism, and social shunning.