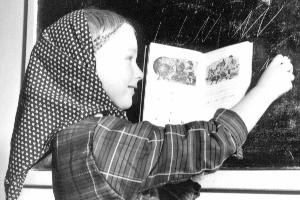 Hutterites are Anabaptist cousins of the Amish who share certain traits in common, including plain dress, the practice of social shunning, and adult baptism.  They differ in a few key areas, including technology–Hutterites accept a wide array of technologies, including the automobile, but especially those that help increase yield on the wide parcels of land they farm.

While Amish live in individual homes next to non-Amish neighbors, Hutterites live in isolated compounds.  By essentially removing themselves physically from the outside world, they feel they are able to better hold worldly influences at bay.

Hutterites also practice community of goods, while Amish individuals and families manage their own finances and possess private property.  Hutterites in contrast have few personal possessions, and colony assets are held in common.  Colony members are not paid, and colony finances are managed by a ‘colony boss’.

With a population of approximately 50,000, Hutterites are one of the larger Old Order groups.

After the response to the Trouble in Amish Paradise documentary, I thought you might enjoy the documentary on Hutterites (see below).  It’s old–made in 1964–but an interesting half-hour introduction to the Hutterite people.  Hutterites reside in Canada and the Upper Midwest, having originally arrived in America from Europe in the 1870s. The documentary examines an Alberta Hutterite community.