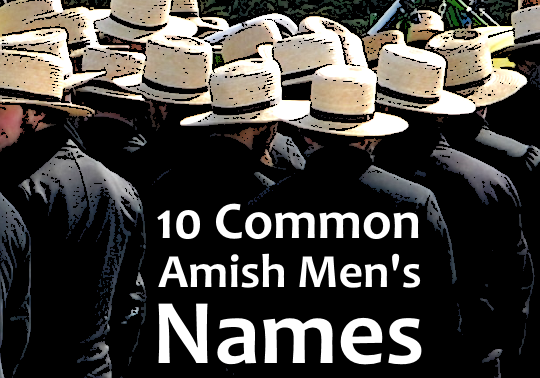 What would you say are the most common Amish men’s names?

As we saw in the Amish Name Game post, names repeat themselves among the Amish–not just surnames, but first names as well.

Unsurprisingly, Biblical names are popular among the Amish, both from the Old and New Testament. Some given names, however, have little or no connection with the Bible.

Background information on names is taken from A Dictionary of First Names by Patrick Hanks, Kate Hardcastle & Flavia Hodges unless otherwise noted.

Some Amish parents break the mold and opt for more obscure names for their children.

The following uncommon first names were all found in minister listings in the latest Raber’s Almanac.

I’ve included background on some from the Dictionary of First Names. Quite a few aren’t listed there, however.

If you’re familiar with any of these names, let us know in the comments.

Hope you enjoyed that. If so, we’ll do Amish women’s names as well.

What other Amish men’s names would you add to these lists, common or uncommon?
Image credit: Lauren Futch