Where have the Amish been settling lately? How rapidly are they growing? Where are the Amish “hot spots” on the map?

Over the past half-decade or so, the Amish have boosted their presence on the US (and world) map by adding communities in new, often never-before-settled places. 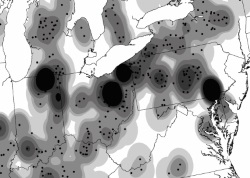 Thanks to a high birth rate and high retention, the Amish population is constantly growing. This leads to existing settlements getting denser, and inevitably, Amish in search of sparser pastures forming new ones.

On that note, I recently dipped back into an article in the Autumn 2015 Journal of Amish and Plain Anabaptist Studies (“A Mid-Decade Update on Amish Settlement Growth” by Joseph F. Donnermeyer & Cory Anderson).

In this article, the authors look at places where the Amish are growing both regionally, and on a state/province level.

They note that “new settlement growth has been most pronounced in states bordering historic regions of Amish settlement.” They reference an Amish population doubling time of 20.5 years, similar to that seen in these Young Center figures. They break down Amish population figures by US Census Bureau region. You’ll also find some neat regional settlement maps (in addition to the density map, partially pictured above).

From the article, here are 5 interesting points on the Amish population, and where it may be headed:


Seven million Amish by 2100 still seems like a stretch, but given current trends, who knows.