5 Amish Stories You Might Have Missed (Plus Standout Reader Comments)

Amish pop up in the news all the time, but we can’t always do full posts on every story. So today we’ll briefly cover 5 of them. I’ve also shared some of my favorite recent reader comments at the end of this post.

So here’s a new type of post to get you caught up. Hope you enjoy, and if you like this, we’ll keep doing it.

1. Amish at Work at the Golden Arches – The Joe Schwartz family of somewhere in Indiana is hired out by McDonald’s to do work at various restaurants around the country. They were recently spotted at work at the McDonald’s in Troy, Alabama:

The family was installing power lines for the Troy restaurant’s new digital signs Wednesday, even though the family cannot use electricity around their own home.

“For construction we can use power tools, and I have a flip phone, but we cannot use it around our home,” Schwartz said.

But do the Schwartzes grab Big Macs on their lunch break? Like many Americans, some Amish people have a soft spot for fast food. 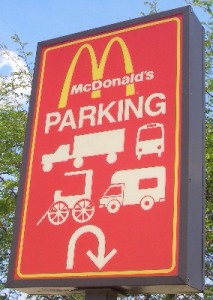 So don’t be surprised to see hitching posts outside McDonald’s and other restaurants in Amish communities.

2. Four Burglary Suspects Caught – Four people targeting Amish homes for burglary in Knox County, Ohio were arrested. Amish are often targeted as they are seen as easier prey for those wanting quick cash and minimal risk of retaliation.

However, many are not just passively accepting being targets. Amish have cooperated with police and this is hardly the first time people have been caught for this. Sadly, often drugs are involved and that seems to be the case here with these suspects, 2 men and 2 women who range in age from 18-24.

3. Amish Farrier on PEI – Perry Kuepfer is an Amish farrier in the young settlement on Prince Edward Island. Just what is a farrier, you might be wondering? These guys are important in Amish communities because they keep the horses’ hooves in working order. Farriers trim and shoe hooves, and this is not often an easy task.

Perry was profiled in a recent article for CBC News. The Amishman is in high demand on the island, and it’s not just local Amish seeking out his services:

Greenan, the owner of Emerald Isle Carriage Tours, is one of a growing number of Islanders who are hiring Kuepfer for his expertise with horses.

“Horse shoeing is definitely an art,” Greenan said. “He does excellent work.”

Kuepfer works six days a week in the summer — never on Sunday — and his services have become so much in demand that he has had to turn people away.

He not only shoes most of the buggy horses for the Amish community in eastern P.E.I., but also hundreds of racehorses and and draft horses from around the Maritimes.

Perry’s been a farrier for about 16 years. To get horses used to being shoed, he suggests “Start picking up their feet when they’re little, they get used to it.” Perry likes living on Prince Edward Island, which he describes as “more laid back” than Ontario.

4. Witness Helps Amish Crash Victim – A man named Steve Stassek helped a 67-year-old Amish man whose buggy had been struck by a van right in front of his property in Van Buren County, Michigan:

Stassek said he sprung into action.

He said, “I was right there by the gentleman and he was in a ditch and he wasn’t breathing right at first, but kind of rolled him to his back and he started breathing, but he was unconscious the whole time.”

Abbott said, “There was nothing that the buggy driver could have done different, as far as markings or anything, he was totally innocent in this whole thing.”

He said, “Where the accident happened is a straightaway-there’s no obstruction. It’s just one of those you look at and it’s sad that it happened. You can’t wrap your mind around it based on where it took place.”

Just to give a reminder of how destructive these crashes can be, have a look at this: 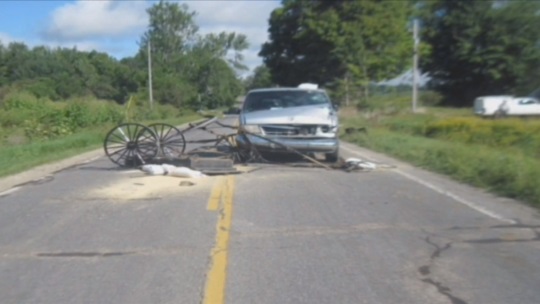 Thankfully, the man survived, though the horse did not.

5. Bupli Soup – Ever tried it? This simple soup features in a recent Amish Cook column. Bupli means “baby” in English, Gloria Yoder explains. But she says it is also known to her as “church soup” as it was what her church ate in Ohio after service. There are just four ingredients – butter, milk, bread, and salt. You can find the full column and recipe here.

A quick ICYMI (In Case You Missed It) on some Amish America posts from the past month:

Visiting the Amish at Holmes County (OH) and Lagrange County (IN)

And finally, your comments. With over 2,000 posts going back 10+ years we get a lot of comments on this site, frequently on older posts, which people might miss.

Here were some that caught my eye from the past several weeks:

Dana wonders why there are not more Amish in West Virginia, while Kathy Kimble shares that a new settlement is being established in Grant County, WV, with 200 Amish expected from New York.

Kelly Weaver’s father has a postcard from 1911 confirming his subscription to the Budget newspaper. Annual subscription cost at the time? 20 cents.

Amish-raised Marie Graber comments on the high-gloss paint on an Amish home’s ceiling.

Ken Tibbets notes the many names harmonicas go by. My favorite has got to be “wheezebox.”

I tend to agree…we have more choices than we sometimes realize. But those choices can be complex. I visited a lively 94 year old today who had her tablet close. She’s on social media regularly because it allows her to kept in touch with her many descendants, located far and near. She seems to be managing her use of social media in a way that fits her values and lifestyle. She didn’t keep checking her messages during our visit, but she did show us pictures. These choices do not have to become zero sum games. One of the things I enjoy about the Amish is their discipline. Decisions actually are made thoughtfully. What we think is weird can actually make sense if we engage our brains and focus on what our values are. A phone in a booth at the end of the driveway is about managing technology. Why do we not think about where we will keep our smartphones?

Jim Cates, Osiah Horst, and Nicholas push back on the idea that Wisconsin v. Yoder was a “betrayal.”

The well-traveled and always-knowledgeable Al in KY shares an update on the Lagrange/Elkhart County settlement. Generally the Amish become more plain as you go east in this community. But there is one island of plainness called the Barrens not far from Shipshewana.

Lori updates us on the Whitefield, Maine Amish community, with a rundown on what the farmers and businesses are selling. Handmade yeast bread, cantaloupe, watermelon, quilts, straw hats, and outhouses are all to be had.

Linda Chaney had a close call on the road in Lafargeville, NY, and wonders why the buggies aren’t better marked.

And last but not least, Nicholas agrees with me that purple peppers are an odd sight 😉