What is Amish Funeral Pie?

Atlas Obscura gives us a brief background of this dish, served by Amish in Pennsylvania at funerals:

Death and raisins share one essential feature: neither belongs to any one season. Eighteenth-century Amish and old-order Mennonites of Pennsylvania were no strangers to the harsh realities of sudden loss, but amidst tragedy, raisins were there. The preserved grapes were a pantry staple—shelf-stable and ready-to-eat throughout the year. In times of emergencies, wives turned to the ingredient known as rosine in their native German. They whipped up raisin pies, which traveled well and required no peeling or pitting, on various occasions, but their consistent presence at funerals led to the nickname “funeral pie.”

I have been to an Amish funeral once, but don’t recall having this. It occurred in Ohio, though. Rebecca Miller mentions cupcakes being served in her account of an Ohio funeral.

Kevin Williams notes in Amish Cooks Across America that the pie is served at weddings in some settlements in Indiana. Church traditions vary across communities. 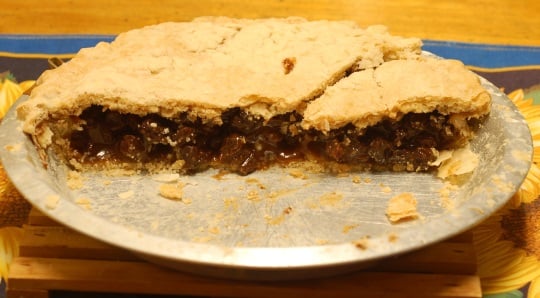 The pie can be made in different ways:

Some bakers turned it into a milky, custard-like filling, while others mimicked the texture of mincemeat. Both sticky pastes went straight into a double-crust, usually in lattice form. Despite evolving technology, Amish communities—steadfast in their devotion to tradition—have continued baking the same raisin pies well into the 21st century.

Food historian William Woys Weaver discusses funeral food of the wider group of Pennsylvania Dutch extensively in his book As American as Shoofly Pie. He mentions this raisin pie as well as a rice pie traditionally served at funerals by one group of Mennonites.

Funeral pie is not the only traditional pie served regularly at a church event out of custom. Snitz pie is standard at the fellowship meal following Amish church service in Lancaster County.

My hosts sent me home with one this past week, following Easter Sunday service at their home. I protested that I didn’t want to deprive their teenage boys of a full pie, and that just a portion would do.

But what was a special treat for me was old hat for them, she explained. The boys eat it all the time. Snitz is made from dried apples. It’s one of my favorites.


Below you’ll find one recipe for funeral pie, from the York Dispatch. And here’s another. And if you want to try your hand at Snitz pie, you’ll find a set of instructions here.

Soak the raisins in the water for 30 minutes.

Combine the sugar, flour, cinnamon and salt in a small bowl. Add to the raisins and mix. Cook over medium heat until the mixture thickens, about 8 minutes. Remove from heat and stir in the walnuts, grated lemon rind and juice.

Add the top crust and bake at 400 degrees for 30 to 40 minutes until the crust is golden brown.