Reader Lindsay recently took a trip to a Chicago international market.  At the market she found products from a company named Calma, which sells Amish-made products including honey, noodles, eggs, and apple butter.

While there, Lindsay picked up some butter;  this being Chicago (2nd-largest “Polish” city outside Warsaw), the label on the butter is partially in Polish.  Calma was apparently founded by immigrants from Poland, and sells its goods in many local Polish stores.

If you have never seen tongue-twisting Polish before, here is a shot of the butter and the label with ingredients written in Polish.  Lindsay adds that “it was pretty good quality butter to boot!” 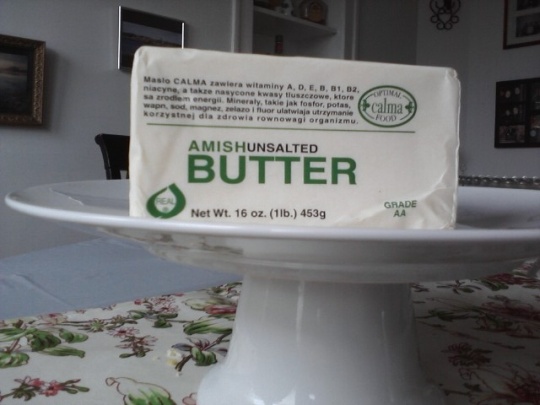 You might notice this blog has a new logo.  Hope you enjoy it.  It’s not quite as plain as the old one, but still not too fancy!  Curious to hear what you think.

Also, you may remember I asked for ideas for a blog tagline, way back when.  I decided on “Exploring Amish Culture and Communities”.  This was quite close to one that Paula suggested on this post from last November.

There are a few other design tweaks here and there, but you’ll see things are pretty much the same.  One thing I wanted to mention–you can now add a title to any comments you leave.

I have a few more things in the works (more to come).  Will probably also be tweaking the design a bit over the next few days.

Alice Aber wrote with a request.  A friend of hers, Frank Talmadge, is seriously ill.  Frank’s 50th birthday is on April 19th, and Alice would like to “mob” him with cards.  If you’d like to send Frank a card, Alice has made arrangements for all cards to be held at the local post office until the day of his birthday.  Sounds like a very nice idea.  The address is: