What do Amish think about other religions?

Amish are tolerant of other faiths

Amish do not evangelize.  Amish society is in many ways closed to outsiders.  Amish only marry other Amish.  Based on these ideas, one might assume that Amish consider the Amish brand of Christianity to be the only, or most preferable path to salvation.  Yet Amish can be quite accepting of other religions, and many have an enlightened view of other faiths.

Amish tend not to criticize other religions

Amish tend not to criticize other religions.  While they may be skeptical of some that are not Christian—for example, Islam—Amish often express respect for other brands of Christianity and even for non-Christian faiths such as Judaism.   One reason for this is the idea that criticizing other religious paths and presuming that theirs is superior would mean to presume to know God’s will.  This would be seen as highly prideful and assumptive by the Amish.

Amish also tend to instinctively respect bodies that teach values of peace and brotherly love.  One Amishman, for example, expressed respect for the Jewish faith, despite doctrinal differences between Judaism and Christianity.

Along the same lines, Amish would find it unhumble and presumptive to assume that the Amish path is the only and best path to heaven.  Amish themselves cannot be sure about their own salvation, and most Amish express a “living hope” rather than believing in assurance of salvation.  Amish typically see such approaches as presumptuous.  Certain Amish groups, in particular the New Order Amish, do espouse an assurance viewpoint, however.

Other Plain and Old Order churches

Amish tend to have a particular affinity for members of other Plain denominations such as Old Order Mennonites, River Brethren, and Hutterites.  These churches share similar beliefs and interpretations of Biblical doctrine. 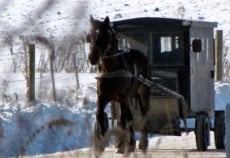 Old Order Mennonites and Amish cooperate in areas such as schooling

Plain churches also share cultural values such as humility, community, and modesty, though the particular expression of those values may differ somewhat.  Plain dress, and use of similar or identical Germanic language in some cases also provide a bond between these groups.

Amish cooperate with Old Order Mennonites in Lancaster County, for example, on schooling and in other areas.  Certain publications, such as Die Botschaft in Pennsylvania, The Budget in Ohio, and the nationally-distributed Family Life magazine feature Plain contributors and have a large reader base across Plain society, including among Mennonites.

Amish and even some higher Mennonites cooperate as well, in particular in charity and mission work.  Amish often contribute financial donations and labor to causes such as disaster relief (ie , after Hurricane Katrina), coordinated through Mennonite-run bodies such as Mennonite Central Committee (MCC) and Mennonite Disaster Relief (MDS).

There may be, however, some concern that exposure to “higher” churches may entice some to leave the Amish.  Some of these churches seek converts from the Amish, such as the Charity Christian Fellowship, a Pennsylvania-based church that has claimed many Amish and former Amish.

Individuals leaving the Amish church may end up in Mennonite and other Anabaptist-umbrella churches that espouse similar principles theologically, but often allow a higher degree of technology.

Some Amish may be attracted to a more charismatic, experiential, and individualized approach to faith which stands in sharp contrast to the Old Order approach, and thus a contingent of Amish leaving the Old Order also gravitate to churches with this orientation.

How do Amish feel about their children joining other churches?  Typically Amish wish to keep their own children within the Amish faith and believe that the Amish way is the best way for those born Amish.  However they typically also accept their children’s decision when choosing not to be Amish in favor of another church.

The desire to keep children within the Amish faith is often for fear of what the Amish refer to as “backsliding”—gradually accepting more and more lenient social and religious practices, and more closely assimilating with “the world”.  Conflict over backsliding has appeared on numerous occasions through Amish history and has led to church division.

Amish tend to take a long view—conscious that decisions made today can affect generations down the line.  An Amish minister expressed this well when he said he had no problem with other Christian denominations—Mennonites, Baptists, Catholics—but felt he should stay Amish, if only for his children’s sake.

A Mennonite church in Texas

Setting a strong and rigid example today means it is less likely that one’s descendants will find social behaviors taboo to the Amish, such as divorce or homosexuality, acceptable.  It makes it more likely that one’s children and grandchildren will take Christian precepts to heart and live them out in day to day life.

In any case, most of those children do choose the Amish path, with 80-90% or more choosing to be baptized.  Having grown up within the culture, being highly exposed to Amish values, and appreciating the social and familial support networks that membership entails, baptism in the Amish faith is often the natural choice for Amish youth.