A Pennsylvania court has ruled against an Amish family, ordering them to do something they staunchly oppose:

After a legal battle spanning more than five years, a Pennsylvania court has agreed with a lower court ruling that ordered a Warren County Amish family to connect to a municipal sewer, even though doing so requires the use of an electric pump.

In an opinion issued Jan. 5, a divided Pennsylvania Commonwealth Court said the Yoder family, who are Old Order Amish and avoid use of electricity for religious reasons, should complete the mandatory connection “without further delay.”

The Yoder family argued that use of electricity violates its religious convictions. The family has used an outhouse — an “old-fashioned privy” — that did not require running water or electricity, according to the decision written by Judge Robert Simpson.

What is the state’s argument here? From Pennlive.com:

In the state court’s majority opinion, Judge Robert Simpson cited other instances where the Yoders used electricity and were not shunned by their conservative religious community. They had used telephones and power tools and had ridden in cars, Simpson observed.

He rejected the family’s argument that they should simply be allowed to keep using their outdoor privy, which lacks electricity and running water.

My understanding here that the resolution the state wants would require some sort of permanent connection to the electric grid, and not just an electric device powered by non-public power means (as suggested by the article title: “Pa. court rules against Amish family and its privy, orders sewer and electric connection”, and also in this 2016 article describing a solution involving “an electric supplier”).

The argument would be that since this family has previously made limited use of technologies which use electricity, they should have no objection to a permanent electric connection.

Amish traditionally have objections to public power based around several issues. One is the symbolic nature of having a permanent power connection to “the world”.

Accepting this connection would mean accepting change imposed from outside, something more traditional groups especially would be apt to oppose. Change can be a slippery slope. Concern over where small changes can lead is a strong source of resistance to it.

Practically speaking, Amish also recognize a difference between a public connection which provides unlimited power, and more limited usage such as via low-power batteries.

Amish concerns are that a public electricity connection, even one that begins in a limited manner, can open the door to using any manner of electrically-powered devices.

The Sugar Grove settlement is nine church districts strong, so not a small community. And if the Yoders are using an outhouse, this is likely a plain community. 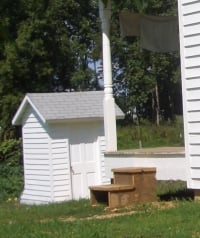 Conventional in-home plumbing is common among Amish, likely moreso than relying solely on outhouses (though Amish schools even in progressive communities have outhouses).

One thing that is unclear is why only one family is involved in this case.

Perhaps others in the community accepted the sewage/electric installation (I doubt this), or perhaps the county has chosen one family on which to make a legal case against.

Or, they may be one of the few which are affected by the township law in consideration, which requires properties abutting the sewer system to connect to it.

So, was there no alternative? From the York Daily Record:

The court ruled that that using an electric pump was ​the “least intrusive means” of connecting to the sewer system.

In a dissenting opinion, Judge Patricia McCullough expressed concern with the ruling, saying there were other ways of disposing of sewage in a sanitary way that would not infringe upon the Yoder family’s religious rights.

“They didn’t consider the other ways that the government could have achieved its ends,” she said. She also said the decision unduly put the burden on the Yoders.

She was also concerned about the possible effects of the case, which she said is one of only a few to apply Pennsylvania’s ​Religious Freedom Protection Act.

While the case doesn’t establish precedent, she said it could be cited in future cases.

It seems alternatives could include powering the pump by some other means, such as a diesel engine.

So will the Yoder family give in to the requirements?

My guess is that they would more likely move to a different community, or perhaps a property that doesn’t fall under this township requirement.

Amish, especially the more conservative as we can assume this group is, are not apt to adopt culturally-threatening change – particularly when handed down by the state after ten years of resistance.

In other clashes between Amish cultural and religious practice, and state interests, we have seen compromise on both sides (as with the Wisconsin smoke detector controversy, or a Swartzentruber community adopting unique buggy markings). Is there still room for compromise here?