Do Amish use solar power?

A year ago I noticed a stark change while in an Indiana Amish community.  Solar panels and spinning wind turbines had populated many an Amish roof in the 5 years since I’d last visited.

A recent article looks at the first Amish household to adopt solar power in the community at Lyndonville, New York (Orleans County).  Jonas Miller may be setting a trend for his community, where the church has officially sanctioned the technology.  High diesel prices have driven the change to solar, which will be used “to power the lights, cash register and other electrical needs for his general store” in his community of two dozen families. 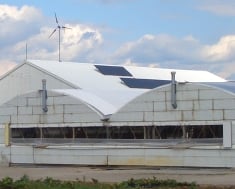 Not all Amish are agreed on solar, as the article notes.  On the one hand solar and wind seem like they’d fit the Amish (or at least the popular perception), being “pure” power sources derived directly from God’s natural abundance.

On the other, the appearance of solar technology just seems a little on the high-tech side.  Sleek solar panels still look starkly futuristic and out-of-place attached to 19th-century Amish barns.  Perhaps this is why some Amish groups balk at the idea of solar.  Also, if a technology is adopted by a higher (less traditional) Amish group, that in and of itself can be enough to make lower groups resist signing on to it.

Do you use any solar technology?  The only piece I own, besides an old calculator somewhere, is a little yard lamp, the kind popular among Amish, purchased in an Ohio Amish store.  Amish are ahead of the curve here (or at least ahead of my curve).

It will be interesting to see to what degree Amish incorporate solar and wind technology.  Maybe one day we’ll observe Amish buggies rolling down the road, plastered with solar panels, or with whirling wind turbines planted on their roofs.  Or maybe not.