If you dig around enough on Facebook, you’ll come across profiles of adolescents with Amish names and profile pics taken in Plain clothing.   These were the catalyst for an interesting piece–“Amish youth hitchin’ up to Facebook“–in yesterday’s Lancaster Sunday News.

As the article makes clear, Amish youth+Facebook is far from a universal phenomenon.  I thought one insight by Steven Nolt was particularly interesting–the way Amish youth use Facebook may actually reinforce the culture, rather than necessarily open Amish youth up to the evils of the world:

Dr. Steve Nolt, history professor at Goshen College in Indiana, and author or co-author of nine books on Amish and Mennonite culture, noted that many of the Lancaster-area youth on Facebook who appear to be Amish are only “friends” with other Amish kids. “In that sense, it serves [as] an insulating social network — one more way that Amish youth socialize only with other Amish youth — rather than a means of expanding Amish social circles,” Nolt said.

I had a few comments which appeared in the article as well, mostly on Amish use of email. 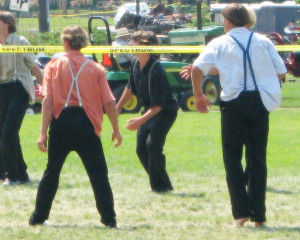 Facebook may not be sanctioned, but volleyball is. Amish youth at play

In a quote that didn’t make the piece, I also told the author that I’d be surprised if some Amish youth were not on Facebook.  Like any other activity with adolescent appeal, a segment of Amish teens will be attracted to social media.

During Rumspringa some–though certainly not all or even a majority–will engage in behaviors we wouldn’t think of as  “Amish”–driving a car, parties and alcohol in some cases, and so on.

But Amish concern is not only about avoiding sinful or dangerous behavior, but also over whether their children will be led away from joining the Amish church.

Most Amish parents want their kids to be baptized into an Amish congregation.  While they don’t make that decision for their youth, parents model proper behaviors and typically encourage their children in the direction of joining.

To your average Amish parent, Facebook is an obscure-to-unknown quantity.  The Amish parent is going to prefer his/her child not to be on it, whether or not the child only has Amish friends.

“There is no doubt in my mind that the bishops would speak against this if they were aware of it,” a Mennonite with close Amish ties is quoted saying in the article.

It sounds like that is already happening, however.  An Amishwoman in the piece notes that a local minister in fact did preach against the social network recently.

Tags: Rumspringa, The Amish and Technology