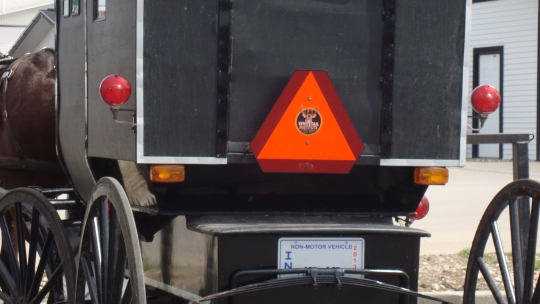 It is not uncommon to see buggies in the NE Indiana community with stickers on their SMV triangles.  I have seen Jayco stickers, KZ RV stickers, logos of fish, deer, horses, and a few religious bumper stickers.  And it’s not just the youth either.  I have seen several married people with stickers on their buggies. The youth are more likely to have stickers that push the boundaries.  For example, I once saw a bumper sticker about dancing drunk on the back of a Rumspringa buggy.

This is true in other communities, particularly the larger settlements.  I have also seen stickers on buggies of other plain churches.  Last week in Lancaster County I noticed a Native American decal on the triangle of an Old Order Mennonite buggy, complemented by additional Native-style decor hanging inside the buggy itself (a dreamcatcher, popular with Amish youth too). 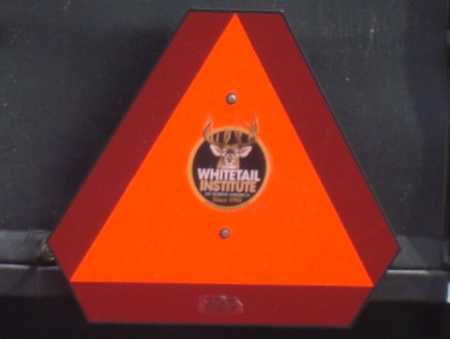 That is a Ford emblem you see on this Lancaster Amish buggy below.  I took this photo six years ago.  I sometimes wonder if the owner ever “graduated” to the real thing or if this insignia was as far as dreams of more horsepower took him. 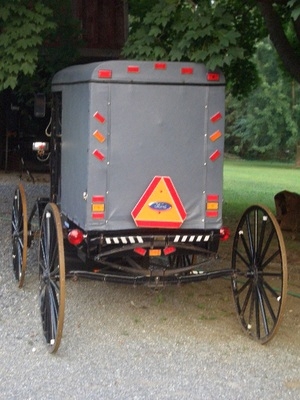 The orange SMV marker is the most contentious object on Amish transport and perhaps in all of Amish society.  On the one hand there are those who are so deeply against using the triangle that they would rather go to jail than adorn their buggies with the worldly symbol.

On the other, some Amish, particularly youth during the transitional period before marriage, happily dress aforesaid symbols up with an extra dab of the world (not that Amish parents are universally happy about it). 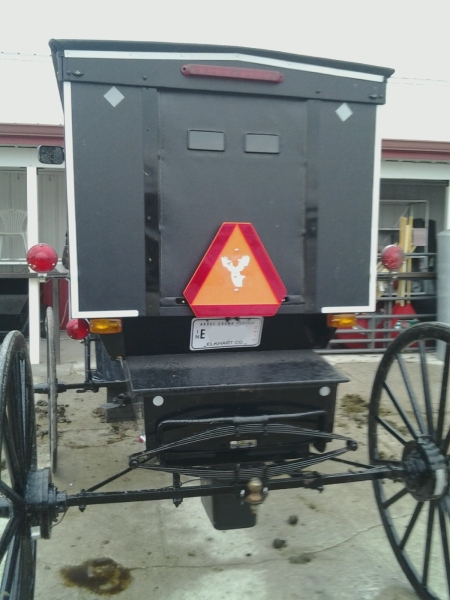 Speaking of which, while driving some Lancaster Amish boys this past weekend, the Swartzentruber Amish happened to come up in conversation.  For these boys, the Swartzentrubers were an exotic tribe, distant Ohio kin probably viewed as peculiar by them as some English see the Amish as a whole.

No doubt the Swartzentrubers frown at the enhancements these young men and their friends place upon a symbol they already find objectionable enough.  Maybe this is as odd to them as not having a triangle at all seems to many English and more than a few Amish.

Have you noticed decals or other adornments on Amish buggies?  Ever on places besides the SMV triangle?