Actually, it’s a “workshop and equipment shed” raising, but that’s not quite as catchy, is it?  Either way, the Amish of Union Grove, North Carolina have been busy on a construction project the past few days.

The proprietors of Hickory Nut Gap Farm, a business which sells specialty beef and pork near Asheville, opted for the services of the state’s only Amish community, hiring a crew of 60 men to complete the work.

The idea to hire the Amish came about when the barn of John Hostetler burned down last year.  Hostetler’s business, Wholesome Country Creamery, supplies Hickory Nut Gap Farm with milk.  After members of the Union Grove community restored Hofstetter’s operation within four days, Hickory Nut Gap decided to hire them to expand their own business.

Unlike the way they are often depicted, this is not a one-day affair (in fact, even the one-day barn raising is a misconception of sorts).  Construction has been ongoing since Wednesday and was expected to conclude today. 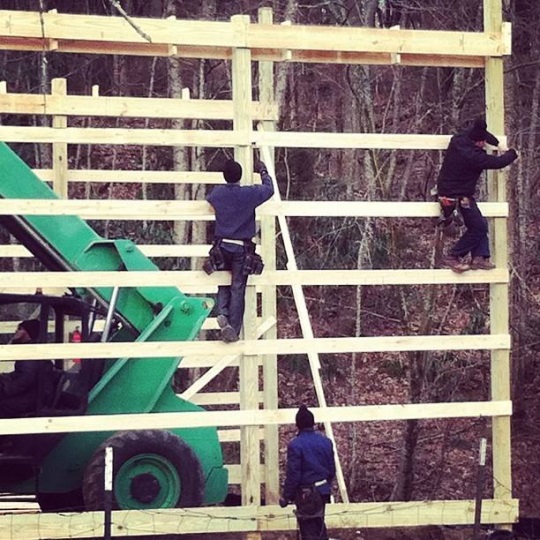 Since I’m from central NC, I tend to think of the Union Grove Amish as “my local Amish community” even though they are around two hours’ drive away.  Nearly 30 years old, the Union Grove community is still just a single congregation in size.  By comparison, two other communities around 2 hours from me, in Halifax County and Charlotte County, Virginia, were founded in 2005 and 1997 respectively, and both are up to 2 church districts.

Like the Oakland, Maryland community, the Union Grove Amish are considered an “electric” New Order settlement.  Due to their community’s small size and low profile, you don’t hear much about North Carolina’s Amish in the media.  I have only visited once, despite basically passing by on every trip to Ohio.   You can read more on Union Grove and the unusual, now-defunct community at Yanceyville, NC, here.

Amish first ventured to settle the Tar Heel State in 1918, when Amish from Pennsylvania, Ohio, and other Midwestern states founded a community on reclaimed land in the Dismal Swamp.  That settlement lasted for nearly 3 decades before coming to an end in 1944.  You can read the interesting history in David Luthy’s The Amish in America: Settlements That Failed 1840-1960, or read a summary here.

Update: A pair of videos have been posted online. The first, by the Asheville Citizen-Times, features footage of the workers and a short interview with Hickory Nut Gap Farm owner Amy Ager

Here’s an interesting excerpt from the accompanying article, explaining how such jobs work:

“We try to be organized and have a lot of help, a lot of crew,” said Ben Luthy, the foreman for the group.

Luthy said money raised from such building projects goes straight to the Union Grove community. “We use it for our medical and our school,” he said.

According to Luthy, the team works between four and six projects a year, the longest of which could take ten days. “That seems to be what we get,” he said. The group, said Luthy, doesn’t push for more work, instead relying solely on requests from farmers.

The second is a time lapse video showing 3 days’ of construction in a little over a minute: