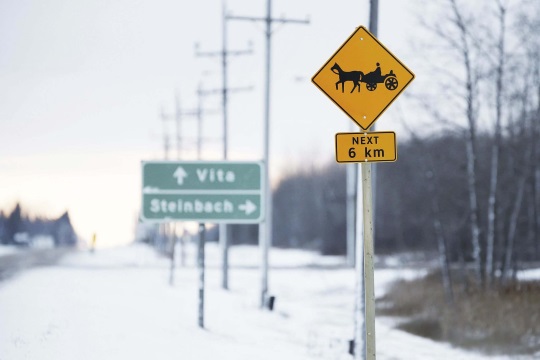 The Winnipeg Free Press reports that Canada will soon have a fourth province with an Amish presence.

Amish from Ontario are buying land and planning to settle in Manitoba, about 100 miles south of province capital Winnipeg, in the Rural Municipality of Stuartburn:

Swidersky estimated about 100 Amish may settle there, mostly young families starting out. There are already highway signs featuring a horse and buggy along Highway 201 to warn motorists to beware when driving in the area.

Only a handful of Amish families have purchased land so far, totalling about a dozen quarter sections (160 acres each), Swidersky said.

Those families went back home to Ontario about two weeks ago to spend the winter there, and plan to return in the spring to build homesteads.

Before leaving, they did some preliminary work to make the land ready for settlement, including drilling wells, obtaining building permits and constructing pole sheds for their horse and wagons.

They also brought out horses and wagons to be boarded in Manitoba over the winter. They used transport trucks and trailers for the move, operated by non-Amish drivers.

This will be the fourth Canadian province with an Amish presence. Amish have long lived in Ontario (since 1824). Small communities were established in the past several years in New Brunswick and Prince Edward Island.


The articles states these Amish come from places including Port Elgin, Salford, and Middlesex County. I believe Port Elgin is a mistake however, and the location is probably Mt. Elgin, which is the same area as Salford.

This will be the westernmost Canadian settlement, and pretty distant, as far as proximity to other Amish settlements. It appears the nearest Amish will be those in northwestern Minnesota (for instance, the Fertile Amish community, which we’ve covered here before, is a 2+ hour drive away).

According to Royden Loewen of the University of Winnipeg, land prices are what’s driving the move. Farmland is expensive in Ontario, and were also a factor in the Amish move to Prince Edward Island.

According to Wikipedia, Stuartburn was originally settled by Ukrainian immigrants, and is considered the first Ukrainian community in Western Canada.

In an interesting side note, this article claims that there is a small Amish community outside Cork in Ireland. This could be referring to the Dunmore East community, which is an Amish-Mennonite community and not Old Order Amish (though that community is over 2 hours away from Cork).