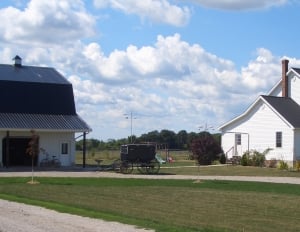 The area of Hicksville, Ohio (Defiance County, is home to an Amish community of just one congregation in size.  What makes it interesting is that it is also quite old, being founded in 1914 (making it the 3rd or 4th-oldest Ohio Amish community).

Amish settlements come and go.  There are over 400 Amish communities today. But there have probably been 150+ which were founded and disappeared again since Amish began arriving in America in the early-mid 1700s.

Some Amish communities grow rapidly, while others fail to launch and disappear again, even within a year or two.  There can be many reasons affecting the growth of an Amish settlement, including economic factors, a lack of church leadership, and progressive religious movements. 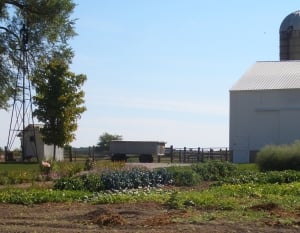 The Hicksville Amish community is one congregation in size

Hicksville has apparently been holding on with one district for some years, not growing much, but not going anywhere.  I don’t know why that is.  Sadly, the person whom I’d ask (and would have a good chance of knowing), Stephen Scott, is no longer with us.

There are a few other Amish communities like this–old but small.   Oakland, Maryland (1850) and Enon Valley, PA (1924) are each a single church district in size.  Kokomo, Indiana (1848), Hutchinson, Kansas (1883), and Garnett, Kansas (1903) have 2 congregations each.  By comparison the Berne, Indiana Amish community, founded 1850, is today around 50 church districts in size. 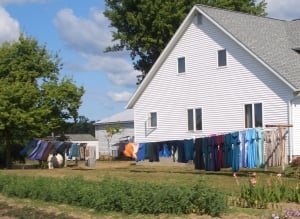 Amish woodcraft at the Hicksville community

I was only in the Hicksville community briefly last summer (there’s not a lot there) but did visit a couple of businesses.  One of them was run by a very hospitable woman whose family had recently moved to the area  from Indiana.  Her store features home and garden implements.

I bought one of those little pathway lights, with the mini solar panel on top, which you often see lining walkways in front of Amish homes.  I don’t have a walkway, but hey, may come in handy someday. 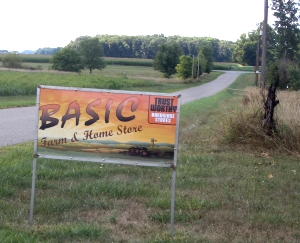 The store is off Gingrich Road (yes, “Gingrich” not “Gingerich”), if you’re in the area look for the signs pointing to “BASIC FARM AND HOME STORE” off State Route 49.

There are, I’d guess, around a couple dozen Amish households in this community.  Seems like a nice place to live, still “country”.  You also might remember this community mentioned last summer in a post about “Amish Races“.  I didn’t catch any of those while I was in the area, but enjoyed my visit nonetheless.