Tiny Houses, Loren Beachy’s Plain Side, and the Amish at Oakland, Maryland

It’s Friday, and I think we’re due for another roundup post.  Here we go:

Loren Beachy writes a column for The Goshen News called “The Plain Side”. Loren is a school teacher and auctioneer living in the Elkhart-Lagrange Amish community.

I’ve been reading some of Loren’s archives lately, including one on preserving the PA Dutch dialect and a funny tale about his school’s end of year parent-student ballgame.  I quite liked the intro to that one, which is titled “Madness in Mudville with the ‘Mighty Casey’ up to bat”:

America loves an underdog.  This time, though, the underdog has a problem. The problem’s name is Lavern Lehman.  His moonshots are legendary and his muscular 280 pounds stand at the plate waving the bat with an ease born of formidable strength.

The rest is just as well written.  Loren’s writing is sharp, funny, and thought-provoking.  You can find Loren’s back columns by searching “Loren Beachy” at the Goshen News website.  In his latest, Loren expresses exasperation over over-using the weather as a conversation starter.

News came over the past week that a judge would allow the state-appointed guardian for Sarah Hershberger to drop her attempt to force chemotherapy treatments for the leukemia-stricken girl.  The Hershberger family apparently returned to their home farm a few weeks ago.  They had sought alternative treatment for Sarah in Mexico, Canada, and Tennessee. 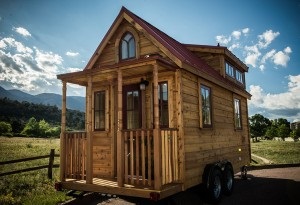 Did you know you could buy an Amish-made “tiny house”?   Did you know there was such a thing as a tiny house, and that tiny house owners also own their own movement?

The Fisher family of Colorado build these for a company called Tumbleweed.  The houses come in lengths of 18, 20, and 24 feet, and you can buy a tiny house “shell” at a base price of around $13,000.

The tiny house movement is about minimalism and simplicity.  I am for both of those, but I am also for legroom, so I may align with the “smallish house” movement instead.

There are more of these shows coming, with Amish Mafia Season 3 kicking off February 25th.  I’m not recommending you watch, just letting you know to get ready for the latest onslaught of “Amish reality TV” coverage.  Breaking Amish will also be returning with a “spinoff” with the tentative title “Return to Amish”.

In related news, Hot Snakes Media, the company behind both Amish Mafia and Breaking Amish, recently signed a 4-year sublease for a 22,000-square-foot space in lower Manhattan.

These guys landed in my inbox earlier in the week, following up our look at snowy Shipshewana.  For the time being they live in northern Indiana.  The first two were taken at a ball field at an Amish school.  The last was taken at the photographer’s friend’s home on request. The snowman by the back stop in photo #2 is huge, notes the photo-taker. 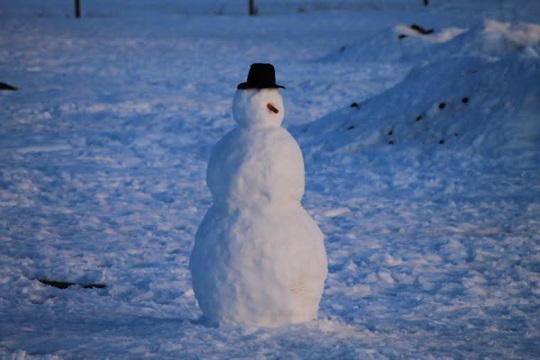 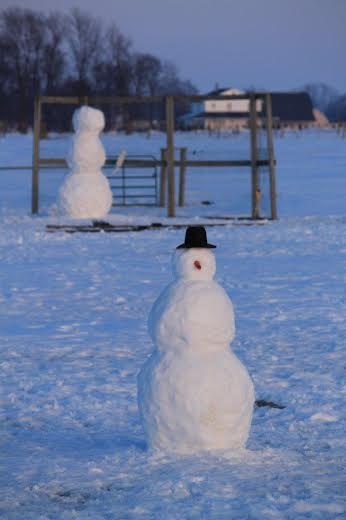 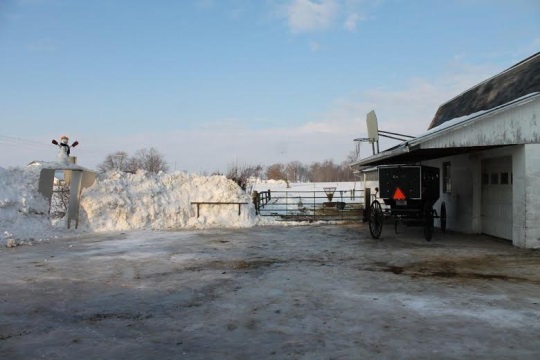 We have two more author interviews/giveaways slated for the coming weeks, and more expected later in 2014.  By the way, if you’d like to read previous interviews, they’re all here.  You’ll find over 3 dozen interviews with authors, scholars and current and former members of Plain churches.

Since we first announced the Amish Business Directory, we’ve been able to add a couple more categories: Amish Cabins (featuring businesses building and selling log cabins, hunting cabins, etc)  and Amish Barns (mini-barns, horse barns, and so on).  We continue to add businesses around North America as people alert me to them (so keep that coming).

The Amish settlement near Oakland in Garrett County, Maryland is unlike most.  It is the oldest New Order Amish settlement (founded around 1850) and in fact came about well before the New Order movement originated (1960s).  Furthermore, the community is one of the few “electric” New Order groups which permit public electricity in homes.  Adding to that, they also are one of the few Amish congregations to worship in a meetinghouse.

The video below, of the Oakland Amish congregation singing “City of Light” as attendees file in for a funeral service, was taken by a non-Amish relative in summer 2013.  It’s part of a larger compilation video which includes footage of an Amish minister preaching, buggies traveling to the cemetery, and burial.

The video taker, Simon Kinsinger, explains in his comments that recording wouldn’t be allowed at a normal service, but that this was a little different given the non-Amish relatives in attendance (Kinsinger previously uploaded a similar video taken at a funeral in the Guthrie, Kentucky Amish community).

You’re unlikely to ever see much footage of Amish church services, but if you do, it will probably come out of a New Order community, who tend to be more permissive about the camera.  In this video you can see the community’s meetinghouse complete with electric lighting, and hear some beautiful singing.