The Amish of Munfordville, Kentucky

The Amish settlement near Munfordville and Horse Cave, Kentucky is the largest in the state, with 13 church districts as of 2010.  Last week I had a chance to visit a number of Kentucky Amish communities, including the Munfordville settlement.

The Amish here live among the hills of Hart County, which lies about halfway between Lexington and Nashville.  Munfordville and Horse Cave are both small towns.  Horse Cave is known for a large cavern which once housed the world’s only “air-conditioned” tennis courts. Note: though “Munfordville” is used here to refer to this community, there are no Amish actually in the town; this simply refers to one of the most common mailing addresses for area Amish.

In some respects the area resembles the Holmes County, Ohio Amish settlement, due to the many hills, winding roads, and “hollers” you come across as you drive through the community.  It’s easy to get lost as you drive about.  On one occasion I followed  a road that trailed off into a field.  Others cut through back woods, with few inhabitants to be found.

As in Holmes County, the very hilly terrain can cause dangers for horse-and-buggy travelers.  In addition to standard buggy warning signs, on some of the steeper and more dangerous hills and curves you find gravel pull-offs, where carriages can pull over out of traffic. 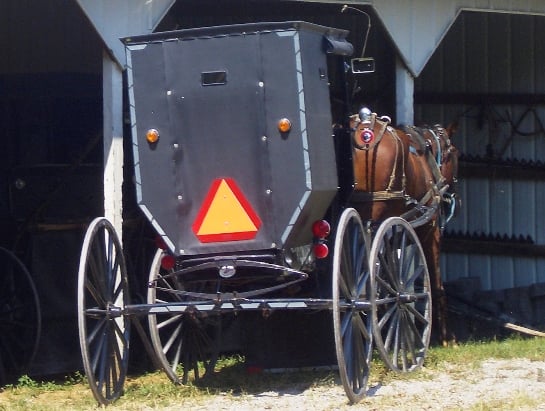 An Amish buggy at Munfordville, KY

The Green River bisects the settlement, winding between the two towns.  Apparently bridges are few and far between; an Amish woman explained to me that at one location you had to travel 13 miles around to get to the other side, though locals take boats across as well.

Amish society is traversed by an elaborate web of connections.  Amish in distant communities may know each other through kinship, business dealings, correspondence in Amish publications such as the Budget, through circle letters, or meeting at support groups, such as those for teachers, or grieving persons, for example. 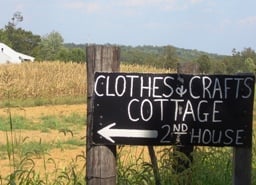 Small businesses dot the valleys of the Munfordville Amish settlement

I found evidence of this at a local clothing store called the Clothes and Crafts Cottage.  Right away I was able to make a connection with a friendly woman managing the store that day, whom we can call “Edna”.

I discovered that we shared a friend living in Holmes County, who wholesales plain clothing.  The store in fact purchases clothing items from this individual (who appears in my Amish business book under the name “Ivan Miller”) and Edna’s family had been up to visit him at his home.

The Munfordville community originates primarily from the Geauga County Amish settlement.  Amish began moving here in 1989.  Edna was quick to point out that the Munfordville settlement, where she had lived for 17 years since moving in from Geauga, was considered the “fastest growing in America”.  She seemed somewhat pleased with the title.

And “fastest-growing”, for that matter, is a reasonable claim, when you consider that some settlements need much more than the 21 years it has taken Munfordville to grow to 13 church districts.

Edna explained that people moved into the Munfordville and Horse Cave area often, with some moving away as well.  Amish migration often follows patterns of kinship, with parent settlements providing daughter communities a steady supply of new settlers over the years.

Edna expressed dissatisfaction with the pace of life in Geauga County.  She explained that in Geauga, the men worked out in manufacturing plants and that people “live on top of each other”.  Munfordville does feel spacious in comparison to that community.

Offering further proof of the Geauga County ties, the shop displayed a number of Geauga church directories available for purchase for $30 by the cash register.  Unfortunately, directories for the Munfordville community itself were unavailable, as Edna explained that the latest edition was quite outdated.  Amish typically update these guides which feature addresses and church district maps every 5-7 years.

Edna encouraged me to visit the local produce auction, which is held on weekdays beginning at 1 pm.

Edna had explained that it would be pumpkin day at the auction, and in fact, other than a few squashes, that was basically all you could see for sale.

I arrived to find a miked-up Amish auctioneer moving down a row of huge boxes of pumpkins up for bidding.  The crowd followed along, as is typical at a produce sale, offering up bids and claiming lots of the seasonal vegetable.  The auctioneer’s cadence was quick and he was clearly experienced at his trade, making swift work of the available pumpkins. 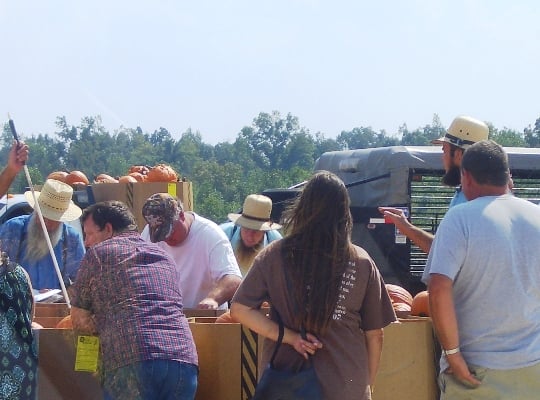 An Amish produce auctioneer, right, plies his trade at the Hart County auction

The produce auction at Munfordville, like the one at the Amish community at Ethridge, Tennessee, provides an outlet for Amish and others to sell their vegetables and fruits.

One way in which this community differs from Holmes County is in the quality of the soil.  Standard dairying is apparently not as common here due to the poorer land quality, although small-scale produce apparently has been viable.  You can find the produce auction at 6880 Cub Run Hwy, Munfordville, KY 42765.

As in other Amish communities where agriculture is less common, businesses abound here, with many manufacturers and retail shops among the hills. 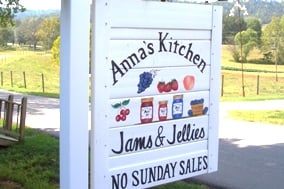 Anna’s Kitchen, for instance, sells a variety of jams and jellies out of a small shop attached to an Amish home.  Vinyl businesses, sawmills, and fabrics shops are among the other businesses found at Munfordville.

Another shop worth visiting is Detweiler’s Country Store, located at Cub Run, not far from the produce auction.  Detweiler’s is a variety store with foods, dry goods, books, clothing, potted plants and a wide array of amenities.

One of many Kentucky Amish settlements

The Munfordville, Kentucky Amish settlement is one of many in the state.  Kentucky itself is home to the 8th-largest Amish population.

Reflecting their ties to Geauga County, Ohio, the Munfordville Amish are a fairly “mainstream” Amish group, active in businesses which cater to non-Amish markets, and accepting technologies such as solar panels.

In addition to the Munfordville Old Order Amish settlement, I visited a Swartzentruber Amish community about 40 minutes away at Sonora in Hardin County.

I also traveled through a New Order Amish settlement at Guthrie, where you are more likely to see an Amish person in a tractor than a buggy (tractors, unlike in most Amish settlements, are allowed for field work and road travel in the Guthrie community).

With over 30 Amish communities, Kentucky has a diverse and growing Amish population.  Munfordville is not the oldest, but is by far the largest and perhaps best-known of those settlements.