The Amish Of Crittenden County, Kentucky

A look at one of Kentucky‘s oldest Amish settlements – plus another Amish business map to add to the growing collection. This one is in Crittenden County, near the town of Marion. There are four church districts; Amish have been here for over 40 years. An article which ran in the Crittenden Press in 2018 marked the completion of their fourth decade in the community:

Forty winters have come and gone since a handful of Amish men and their families migrated to rural Crittenden County. 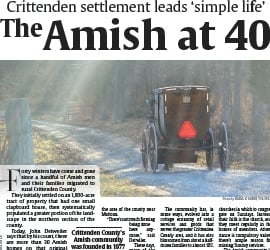 They initially settled on an 1,800-acre tract of property that had one small clapboard house, then systematically populated a greater portion of the landscape in the northern section of the county.

Today, John Detweiler says that by his count, there are more than 30 Amish homes on that original farm where the Christian group’s settlement began in December 1977.

Detweiler, 90, peers through a set of strikingly blue eyes centered beneath his long white locks and a snowy beard and tells how things have changed over the last four decades of Amish occupation in the area of the county near Mattoon.

“There’s not much farming being done here anymore,” said Detwiler.

And as in many other Amish places, the area has become increasingly business-oriented:

These days, many of the working age men are carpenters, loggers, mill operators, cabinet makers, butchers, grocers or producers of fruit, flowers and berries. The days of each household raising a few acres of corn and hay are about gone.

The community has, in some ways, evolved into a cottage economy of retail services and goods that serves the greater Crittenden County area, and it has also blossomed from about a half-dozen families to almost 100.

The map produced by the local tourism commission contains around 30 Amish businesses, including multiple greenhouses, food outlets, furniture, a bakery, a saddle shop and a leather shop. 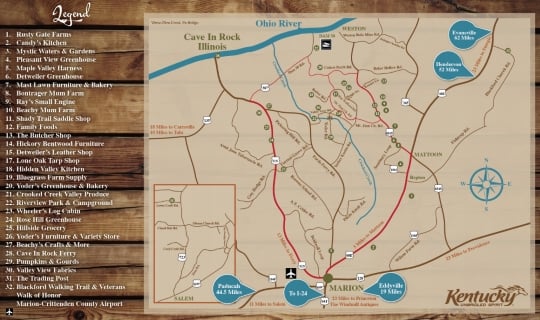 Looking at the photo below (via kentuckytourism.com), the hand-lettered business signs you see in the background resemble those seen in Swartzentruber communities. 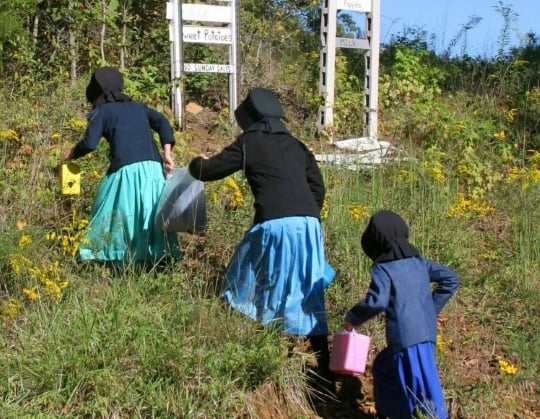 However the buggies, sporting SMV triangles, have a more progressive appearance. The article informs us that most families here have roots in Delaware – which would explain the rounded Dover-style buggy appearance in the photo at top.

Another interesting note on this community: at least two of the early residents came from the failed Amish settlement in Paraguay.

In the 1960s and 70s, Amish had a community in northern Paraguay, lasting about a decade. The end of that community would have more-or-less coincided with the founding of the Crittenden County community:

Hertzler and Detweiler came to Kentucky from South America where land, at the time, was even less expensive than Kentucky.

“We purchased some for $2.50 an acre and the rest was $7 an acre,” Detweiler said about Paraguay, a country in central South America below the equator where the climate is very hot. Property became so expensive in Pennsylvania it made expansion of the Amish community there difficult.

He remembers making some inquiries in the 1970s about the type of land available in Kentucky. He wrote a letter to his friend, Elmer Yoder, who was already here. Detweiler said he was told that the land was rolling, but when he got here, he found it a bit more hilly and perhaps more suitable to cattle farming than row cropping.

Amish settlement in South America has been very rare, so that little nugget adds another interesting detail to the Crittenden County story.

The article linked above shares how the Amish and local English community get along well:

The broader community has been largely receptive to the Amish. Former county magistrate Helen McConnell, whose late husband was a magistrate before her, has developed strong relationships with her neighbors, the Amish. She lives on the same road as many of them just west of the tiny village of Mattoon. The Amish, she said, have taken many farms that were grown over and out of production and made them into something again.

“They’ve cleaned a lot of these places up and done a whole lot for the countryside,” McConnell said.
She calls the Amish caring neighbors who are quick to lend a hand.

“They dress a little different, but they’re really good people. I have never heard anyone fussing about them.”

He and McConnell both say the Amish are among first responders in times of crises. When a tornado ripped through the area about 10 years ago, they provided meals for those cleaning up the debris and helped make repairs to damaged property.

For a small community, the article gives the impression that it is quite popular with tourists. And some of our readers have visited Crittenden County. Jeremiah shared this:

On way to KY Lake, a few weeks ago, took a little detour through Marion KY. Visited Amish Community (Yoder’s Variety Store) and bought a few things. Really beautiful area and my kids enjoyed the trip.

Crittenden County sounds like a nice place to visit. With this business map guiding the way, I hope some of you enjoy checking out this Amish corner of the Bluegrass State.