Not to hammer the political topic, but a Polish friend just sent a link related to yesterday’s post.  This time a reporter from one of Poland’s largest dailies, traveling through the US hot on the Obama/McCain trail, has dug up an Amishman who apparently had no idea that the elections were going on right now.

‘But I never heard of Obama’ is the name of the article (translated from the Polish), and you can sort of guess where it goes from there.

I think this makes a convenient fit-the-stereotype article;  in fact it almost seems like a parody in places.  Come to think of it, I sometimes wonder if some of these Amish guys who get interviewed aren’t actually having a grand time of it messing around with the reporters.  The foreign types are probably the easiest prey. 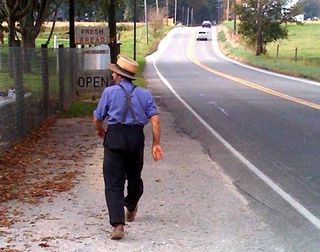 Emmanuel, who lives in Delta in southern York County, and who apparently has brothers in Texas (or ‘brother Amish’ in Texas, it’s unclear in the Polish version, at least to me) does not get involved with newspapers or too much political talk, even with his customers.

“We rarely speak with them about anything other than jams”, he admits.  “People are different.  Some of them are no good, which you can see by the way their women dress.”

Emmanuel expresses his approval on learning that communism has ended in Poland, asks where it is on the map (which in fact is a question I often get–European geography just doesn’t figure too highly in Amish schools, which is not surprising–who really needs it?!), and closes by asking the reporter if he himself isn’t running for president as well.

I almost have to believe somebody, ahem, was getting their leg pulled on that last one.

The guy that wrote this comes off a bit condescending, which actually isn’t a surprise when you consider where he’s coming from.  It may surprise some media types, but there’s probably worse things to be unaware of than what’s going on in politics.