As I write this I’m sitting at home late Sunday morning, happily munching on bread slathered with Amish peanut butter, trying to keep it from sticking my laptop’s keys together.  Amish across America will soon be doing the same at the after-church fellowship meal (the peanut butter, not the laptop part), at which the Amish interpretation of the venerable nut spread features prominently.

What makes the stuff so darn good? I recently gave a jar to someone who’d never had it before.  A day later it was half gone, gobbled by the spoonful, along with what I’m sure had to be an intake of at least 3000 calories and 880 grams of fat (Jenny Craig this ain’t). 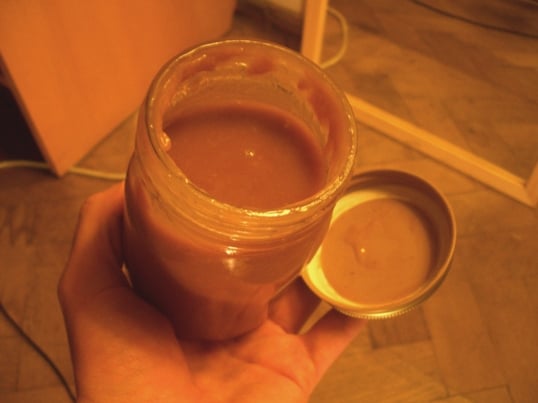 Amish peanut butter: closest thing to a controlled substance in the Amish repertoire

I am currently in possession of two jars, one which I picked up from a Kentucky Amish producer located at the end of a long lane leading to the back of nowhere.  The second is technically not “Amish” but bears the tag on its label: Mrs. Miller’s Amish Peanut Butter Spread.

Mrs. Miller’s is a non-Amish business located in the little town of Fredericksburg on the Holmes-Wayne County border in Ohio.  They are something of a mega-producer of canned goods and noodles, and you’ll find their stuff distributed in Amish areas around the country.  Miller’s products are usually pretty tasty, and I enjoyed meeting some friendly folks there when I dropped in once.

The Kentucky Amish spread, when I found it sitting on the shelf in the Amishman’s shop (the shop doubles as a tarp business and a storefront for his wife’s home cannery; the owner is a member of a Swartzentruber Amish church), actually had visibly separate layers–a darker layer above, and a molasses-y liquid beneath.

The Amishman slowly rotated the jar, mixing the two layers together as I fished for dollars.  I’ve noticed keeping it in the fridge keeps the layers together, as does heat (maybe I should stop experimenting with it and just eat it, I know).  Otherwise it inevitably segregates into layers when reaching room temp.

For culinary neophytes like myself, Amish Peanut Butter is made through a process shrouded in a level of mystery akin to that of scrapple (though, I’m sure, much more pleasant to think about).  Just what gives the spread its characteristic sweet flavor?  (For that matter, Amish peanut butter is not the kind you’d want to combine with PB’s longstanding partner in crime, J.  Jam or jelly or any sort of marmalade slapped on top would cause instant sugar catatonia, I’m certain.  Though I bet it’s been tried).

I’ve been told the sweetness comes from molasses, or from melted marshmallows.  I imagine there are various ways to sugar it up.  The Mrs. Miller’s I’m eating right now has a distinct marshmallowy flavor, and smell, it seems.  Sweet-sounding ingredients on the Miller’s label include Honey, Tapioca Starch, and Corn Syrup, as well as the always ominous-sounding (at least to me) “Artifical Flavor”. 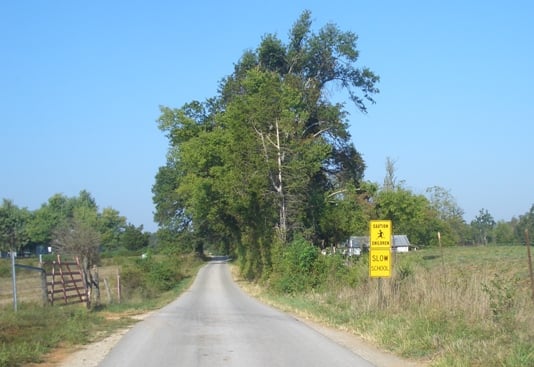 On the prowl for Amish peanut butter in Kentucky

The Swartzentruber product lacks any sort of label with ingredients, just a mason jar with hand-written product name and price, $4, slapped on top.   The Swartzentruber type is less sweet, and more like what I’ve eaten at Amish church meals.  Miller’s is lighter in color and seems a tad on the sweeter side, though that may be to some folks’ liking.

Amish peanut butter is a characteristic treat on Sundays.  Usually you slather it on bread, maybe with some schmier kase (a cheese spread), salty pretzels, pickles, beets, coldcuts, or cheese slices thrown into the mix.  If that sounds like a bunch of stuff you wouldn’t usually combine with peanut butter, well, you’re probably right.  But let’s just say that stranger things have been eaten.

And the cheesey-peanutty-pickley mix actually goes down quite well after 3 hours in church, especially if you skipped breakfast.

For some, Amish peanut butter seems to be, well, more than just something you schmier on bread.  An Amishman in Indiana once explained (with a distinct air of gravity) that one thing which people who leave the Amish church always miss is the Sunday peanut spread.

I’m sure there’s a lot more to it than that.  But this may at least give an inkling of the mighty pull of Amish peanut butter.