I’ve written about how Amish sometimes make goods for upscale retailers, such as a pair of Pennsylvania Amish brothers who produce leather place settings and picture frames for Ralph Lauren. 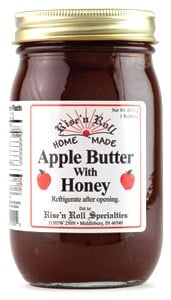 I had a look around and learned that Dean and Deluca also sells things like foie gras, caviar, and something called “white truffle salami”. I guess “plain” food now qualifies to be carried in such refined company.  Dean and Deluca lets us know the butter is “delightfully smooth” and “made the old-fashioned way” (how else!).

At $5.50 per 16-oz jar, you’ll pay a premium, though not as much as I think they could be charging.  Apple butter is one of my favorite…desserts?  condiments? (not sure what it is, really).  My favorite is probably Yoder’s, made in a couple of versions by an Ohio Amish couple.

I guess Dean and Deluca’s customers will now be able to taste Amish apple butter (and more power to them).  And good for Rise ‘n Roll to be finding new markets outside of the traditional.