Amish Sing “I Am Free” Underground In NYC (Video)

We’ve lately seen photos of Amish on the beach on Staten Island, so how about Amish singing an uplifting Christian song in the NYC subway?

There is some discussion in the Youtube comments over whether these are Amish, or a Mennonite or other Anabaptist church.

Would you recognize this group as Amish? 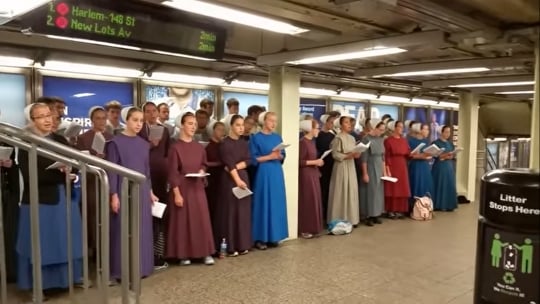 These people have the appearance of mainstream-to-progressive Amish, and going by things like the men’s hair (and the basic fact that they are singing in NYC) I would say they are of a New Order Amish persuasion.

This next video is of lower quality, but also appears to be a similar (maybe the same?) group of Amish.

The location is described as “grand central, New York,” though it is confusingly labeled as “Mennonite church choir”:

For that matter there are several other videos on Youtube showing other Plain groups singing, not Amish but of other Anabaptist background.

This group is described as Amish, but you can see right away by the girls’ prayer coverings that this is not a horse-and-buggy Amish church:

This male-heavy group is singing at Penn Station. The choir leader guides the tune:

And finally, here is the “choir of the Richland Mennonite Church” lifting their voices somewhere in the subway system:

Sometimes Amish and other plain Anabaptists are drawn to the nation’s largest city as tourists. It seems there is also some custom of singing Christian songs under the streets of New York.

It’s a form of soft evangelization and witness that no doubt catches the eyes and ears of at least some passersby in the Big Apple underground (category #5 of occasions when Amish sing).

And it probably takes some amount of courage to belt out religious songs in public in a big secular-minded city like that.

I found it inspiring. I hope it uplifts the people who are fortunate enough to hear these hymns.