The Bloomfield Amish community is one of the largest in Iowa 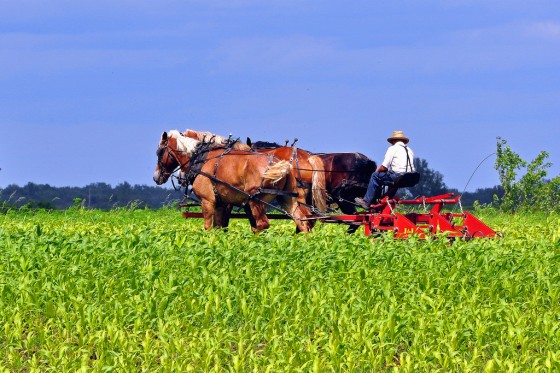 The Amish community lying north and west of Bloomfield, Iowa is one of the three largest in the state.  Like the nearby settlement at Kalona, and the more conservative group found in Buchanan County in the northeast part of the state, Bloomfield is home to roughly 8 church districts, comprising about 175 households.

Yet the Bloomfield settlement is by far the youngest of the three, having been founded in 1971, while the Kalona group came into being a full 125 years earlier, in 1846.  Amish settlements develop and grow at different rates depending on numerous factors.

Agriculture remains important in the area, as seen in the above photo (photo credit: TumblingRun) of a Bloomfield Amish farmer working his fields with a three-horse team.  The Bloomfield community is also quite entrepreneurial;  as of 2003, there were at least 69 businesses in operation, roughly one per two households.

These included three buggy shops, a strawberry farm/greenhouse, a bakery, a kiln, numerous furniture and wood processing businesses, a chimney seller, two horseshoers, a rug weaver, and a refrigerator business.

I spent a few days in Bloomfield in 2004 while selling books in the settlement.  It was a nice community, and my books did fairly well there.   Bloomfield is also the home of Titus Wagler, an Amishman paralyzed in an accident in the early 1980s, and who was subsequently the subject of a book written by his father David.   Titus runs a successful truss business in the heart of the community.

Another business owner I recall meeting was a horse trainer.  I didn’t get a chance to speak with him very long as he was in quite a hurry.  Business seemed to be booming.  But I found this quite a friendly group of people and I enjoyed the time I spent there, having some memorable conversations.  Two discussions I recall were about travel and geography, with an Amishman quite interested in the topic and having a number of maps on his wall, and with another young father about the 9/11 attacks, as that day happened to be the anniversary of those events.

As a related aside, Ira Wagler, who lived in the area for a period, has a few old photos of interest on his website.  Ira also has an interesting post about running around in Bloomfield when it was a much smaller community.

Ira summarizes those days of youth:  “Pretty harmless stuff, really. We weren’t destructive. We didn’t terrorize people. But somehow, we managed to frequently trigger a great flood of dramatic groans and intonations from parent and preacher alike.”

Read more on the Iowa Amish, including other Amish communities throughout the state, or view an Iowa Amish Furniture directory.