You may remember news last summer that researchers had conducted a nationwide Amish population survey.  I just had a chance to read an interesting paper detailing their findings.  Here are 5 of them: 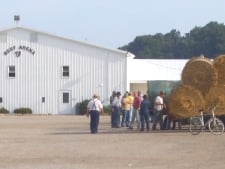 Will Lagrange County one day be majority-Amish?

5. Amish clusters  If you want to visit many Amish settlements in a short amount of time, head to Western Pennsylvania. In the three contiguous counties of Crawford and Mercer in PA, plus Ashtabula County in Ohio, you’ll find 22 Amish settlements.  This represents almost 5% of all Amish communities in North America.

You can read a draft version of the paper (“The Amish Population: County Estimates and Settlement Patterns of the Old Orders”, by Joseph Donnermeyer, Cory Anderson, and Elizabeth Cooksey) here (page moved).

Here are three thoughts I had while reading this paper:

2. Large vs. Medium vs. Small If you selected a random Amish person, there is a 1 in 3 chance they would live in one of what we could call the 4 “mega-settlements”.  There is a real difference between living and raising children in a community of 100+ church districts vs. one of just a handful.  For example it is essentially impossible for such a person to know all the people in his or her community, each of which contains thousands of Amish households. 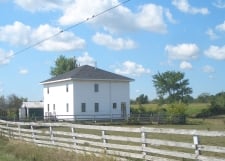 When writing about a community I sometimes pause when having to describe its size.  Is such-and-such community “large”, or just “medium”?  When does a settlement stop being “small”?  There is a big drop in size from #4, Geauga County, to the next largest settlement of Adams County, Indiana, though I’d still think of Adams County with its 45-50 churches as “large”.  Does a settlement become “large” when a  middle-aged adult can no longer place all the families in it?

For what it’s worth, I have tended to think of “small” communities being from 1-4 districts in size, “medium” those from 5-20, and “large” those above 20 churches.  This designation is arbitrary, though there may be something to the name-your-neighbor theory.  I need to ask some Amish people what to them feels like a large community, etc.

3. Community clustering Amish may be drawn to an area by the presence of other Amish, resulting in unrelated settlements living in close proximity to one another (as with the 3 PA/OH counties mentioned above).  Other areas where this has been seen include New York’s Mohawk Valley and the southern Indiana counties of Orange and Washington.

This makes sense in that a lot of the footwork has already been done–the local ground has been plowed, so to speak.  The land is probably decently-priced.  You have a sense of how English take to Amish in the area, such as how they tolerate buggies and their leave-behinds on the road.  And the economic prospects for survival have been at least somewhat tested as well.