Should we leave Amish and their outhouses alone?

Amish in Hardin County, Ohio are embroiled in an outhouse controversy that’s been percolating for the past year (more details here).

Amish are balking at requirements that new homes have a “proper well”, paid waste removal, and septic system. Common practice in this community is to spread outhouse waste on the fields.

Health and environmental concerns are the reasons given for enforcement.

Interestingly, old homes are not subject to the requirements, which authorities said they would start enforcing last year.  Only newly built homes are.  Two recently-built homes do not comply.

If the owners don’t get with the program, they will be evicted.  A load of Amish are expected today at a Board of Health appeal at Kenton City Hall:

“They think they’re fighting three of us, but they aren’t,” Hershberger said as he stood among the construction materials outside his house last week. “We stand as one community.”

The families haven’t hired lawyers, even though the next step if they lose this appeal will be Common Pleas Court. Hershberger said he doesn’t want Tuesday’s meeting to be confrontational.

“Seems to me, there ought to be some kind of compromise,” he said. “We’ll let them give their sixpence, and then we’ll see where we stand. But I can tell you this: I’m not moving.”

An issue too ugly?

This sounds like a determined community.  The authorities sound determined too. “The health board has bent over backward for these people” says the Hardin County prosecutor, a comment which seems to reveal no small level of frustration. 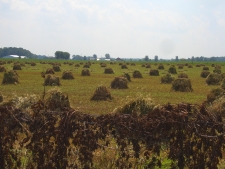 Are non-Amish rallying to the Amish cause right now?  I’m not sure, but I doubt it. Unlike selling raw milk or controlling your child’s education, human waste disposal is an icky subject, and hardly captivating.

So I’m skeptical as to the Amish people getting their way here.  Though perhaps a compromise could be reached.

Speaking of which, the way the law is now being enforced seems like a compromise itself, but a peculiar one.  If this practice is such a hazard, why not prohibit it for “old” homes too?

One of the Amishman under fire claims to have had his water independently tested, and that it was graded to be safe.  So is the health hazard as dire as suggested?

I thought of one possible argument in favor of the grandfather clause: perhaps cumulative environmental impact will escalate as more homes are built.  Thus the enforcement on new building only, to control the traditional practice at current levels.

I don’t know if that makes sense.  Readers in the know on this sort of thing, let us know.

Where do your sympathies lie?  Should the Hardin County Amish and their outhouses be left alone, or should they get with the program?