WNYF reports that Amish in the Swartzentruber community of St. Lawrence County, New York fear being sent to jail, due to a recent push by county legislators to require the Slow Moving Vehicle safety triangle on their buggies.

But does the triangle really even improve safety compared to the current solution? 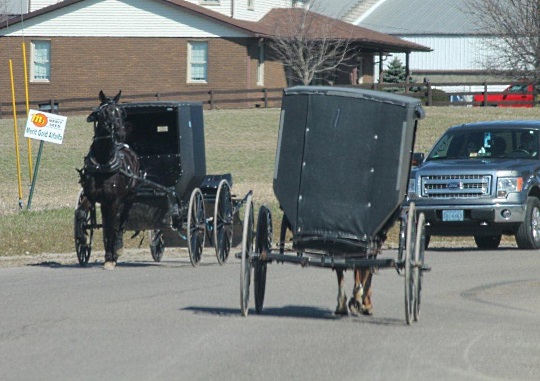 Before touching on that question, a little background. When they worry about going to jail, Amish in St. Lawrence County no doubt have the recent experience of their co-religionists in Kentucky in mind.

Numerous Amishmen in three Kentucky counties were either cited or jailed in 2011 and 2012 for refusing to pay fines for failure to display the triangle (at least 17 in total were imprisoned). 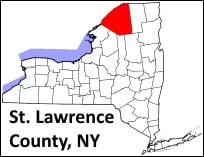 A later change to state law allowed them to use reflective tape around the buggy border instead of the triangle (you can see an example in the photo, of a similar group in Ohio, above).

Amish in St. Lawrence County already use the tape, thanks to a three-decades-old exemption to New York state law. Apparently local authorities have felt the need to re-address this issue.

The Swartzentruber Amish are the group most famously opposed to using the triangle (see here for reasons why Amish object to the SMV triangle). In the video below, SUNY-Potsdam professor Karen Johnson-Weiner addresses the issue from a Swartzentruber viewpoint.

As we’ve seen in Karen’s writings here on the site, she knows the Swartzentruber community well, perhaps better than any other non-Amish person. Karen says that for members of the group, “it’s too fancy, it suggests a reliance on man-made remedies rather than God.”

As far as input from the Amish community, one member had this to say:

Levi Miller of Flackville told us putting an orange symbol on the back of his black buggy would not make it “plain.”

He says “the community relies on God, not symbols or reflective tape, to keep them safe” on busy highways.

Others in the Amish community questioned why no one has come to them to talk about the safety issue or need for reflective triangle signs.

A vote on the issue is scheduled for the May 4 meeting of the county legislature. Many Amish are expected to attend.

There’s one possibly faulty assumption here–and it’s one that I made for many years: that the orange triangle is in fact the best marking to help prevent road accidents (or at least, better than silver-grey reflective tape).

He finds that the triangle is not necessarily better than reflective tape, and–surprisingly–may even decrease safety (Huh? was my first response to that). 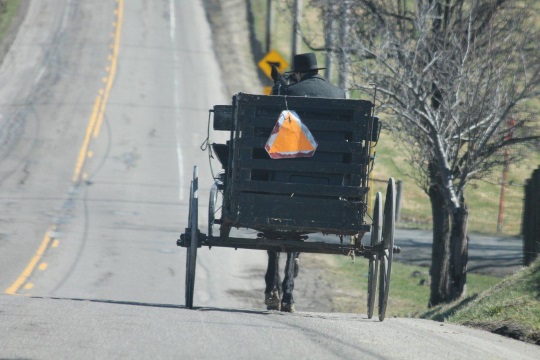 If you’re scratching your head too, this suggestion stems from two potential factors: First, the triangle’s lack of ability to convey width (which reflective tape around the vehicle perimeter can do) while drawing attention to the center of the vehicle. This may be a factor in the common rear-strike collision during passing.

The second factor is something called the “moth effect“–interestingly, crash analysts have observed that motorists tend to drive towards well-lit vehicles, not unlike a moth to light. The triangle plus bright lighting used by more progressive Amish may create this effect.

You can read our summary of that article here or the article itself in full here.

So, the “common-sense” assumption that the triangle must be the superior safety marker may be wrong to begin with. I wonder if anyone in the St. Lawrence County legislature has read Cory’s article.

Do the authorities really understand this Amish group?

I was a little surprised to see this conflict arise, given the age of the community (Amish have lived in the county since the mid-1970s), which suggests that there is a satisfactory co-existence between Amish and non-Amish, at least over the triangle.

You’re more likely to see conflict between the plainer Amish groups in young communities, where locals are unfamiliar with Amish ways.

On the other hand, there has been recent conflict here (over smoke alarms, though resolved in 2012), so there may be an ongoing tension not visible on the surface.

I don’t know if the local officials realize who they’re dealing with (I realize that sounds like a line from an action movie, but I’m not suggesting anything ill here). What I mean is that I’d expect the entire community of over 1,000 Amish to move before they adopted the triangle.

I don’t know of any situation in which a Swartzentruber group has accepted the triangle. They don’t bend on many things, and that’s even more the case with something as visible and symbolic as the buggy and orange triangle.

So asking the Swartzentruber Amish to adopt the triangle is asking more than they probably realize. Karen Johnson-Weiner understands this stance well. Hopefully the authorities in St. Lawrence County will gain similar understanding before this takes a course like the Kentucky situation.

UPDATE May 5, 2015: County legislators met last night as planned, and unanimously decided to postpone a vote until June 1. Citizens on both side of the debate spoke at the meeting. From the Watertown Daily Times:

The decision came after hearing from three citizens who spoke in favor of the requirement and three who argued against it during the meeting’s public comment period.

Norma R. Finley, a retired public health nurse from Ogdensburg, said the Amish are allowed to “get away with anything they want” and she has had several near crashes with Amish buggies.

She threatened lawmakers that if they don’t take action to improve the visibility of buggies on the roadway, she will not hesitate to file a lawsuit against the county and the state.

Karen Johnson-Weiner was among the speakers:

Karen M. Johnson-Weiner, a SUNY Potsdam professor who is considered an Amish expert, said research has shown the reflective tape is more effective than the orange triangle at improving visibility. She suggested that non-Amish drivers should slow down and pay close attention when driving.

Mark Matthews, a member of the Kendrew Grange, a community organization, suggested not imprisoning Amish who violate an SMV law, but rather impounding the buggies. “If they’re taken off the road, that’ll make the roads safer for all of us,” said Matthews.

Legislators and Amish leaders are scheduled to meet May 21 to discuss the matter. “A face-to-face meeting with the Amish will do much more than send a resolution to Albany,” said Legislature Chairman Joseph R. Lightfoot.

Here’s a report and video from the meeting via WNYF: