I hadn’t seen today’s video until a few days ago, when Bob Rosier passed along a link.  Author and Amish Cook editor Kevin Williams visited the Beeville (Bee County), Texas Amish community 2 or 3 years ago, and filmed this 8-minute piece (below) giving a window into the settlement and their culinary traditions. 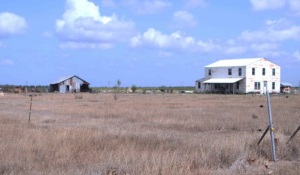 An Amish home in Bee County, TX. All photos by Bob Rosier

Kevin’s video takes you inside the community, which at the time of filming had only 9 households, most from the founding Borntrager family.

You see the home of Daniel and Ruth Borntrager which Kevin visited.  He briefly describes the technology allowed, and then takes a look at the local flora, including fig plants grown by one of the Amishmen (citrus and olives also grow in the area).

People have commented on the way families live in the Bee County community, in an environment that is anything but picture perfect compared to the covers of Amish Country tourist pamphlets.

This settlement surprises due to its impoverished appearance, exacerbated by the south Texas terrain.  For me that is neither here nor there, as many Amish, especially in smaller, off-the-beaten path communities, live in harsher economic conditions than say those in the very prosperous community in Lancaster. 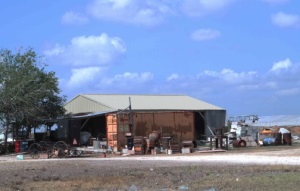 A buggy outside a shop in Bee County

Some small Amish communities deal with issues related to their isolation, which can include economic survival and dating prospects for their youth.

Larger communities don’t really have those problems, though they may have challenges on the other end of the spectrum–the perils of economic prosperity and a wider assortment of youth temptations.


As for economics, Kevin gives you a look at the exterior of Borntrager’s Combination Shop, which we’ve seen here in some of Bob’s Bee County photos.

Eggs for sale. Inside Borntrager’s

Borntrager’s offerings include carriages (made mainly for the non-Amish population), local honey, and baked goods on Fridays.

Kevin also shows you some of his purchases from Borntrager’s, including wild grape jelly and a variety of Mexican squash, “considered a delicacy” locally.  Visitors are welcome; the shop is clearly an important part of the local Amish economy.

The video closes with a bit on where the Bee County community is located (3 hours southwest of Houston; an hour and a half from San Antonio), including a shot of the only sign indicating you’re entering the Amish area.