Reader Darlene paid a recent visit to Amish near Stone Arabia, New York (Montgomery County).  This is in the Mohawk Valley area of the state, near the Adirondack Mountains, and in the vicinity of the town of Fort Plain.

In New York Amish, Karen Johnson-Weiner writes that Amish migration to the area began in 1986, when Byler Amish (New Wilmington, PA roots) settled in the vicinity of Fort Plain.  There are 5 church districts there today. There is another, smaller settlement in Montgomery County, founded by Amish from Ohio.

“Hoping the Amish could help revitalize the county but wary of turning their new neighbors into tourist attractions, Montgomery County residents have, for the most part, simply made the Amish feel welcome.   As a scribe from Gettysburg, Pennsylvania wrote about Montgomery County to Die Botschaft, “The English [non-Amish] people have really welcomed and accepted [the Amish].  They weren’t there long till different business places have put up hitching posts, and even installed public telephones for their convenience.” (New York Amish, p. 104)

It sounds like Darlene was made to feel welcome herself. She has quite a few interesting observations from her visit, which I’ve posted below.  The rest of this post is her commentary.  Thanks Darlene! 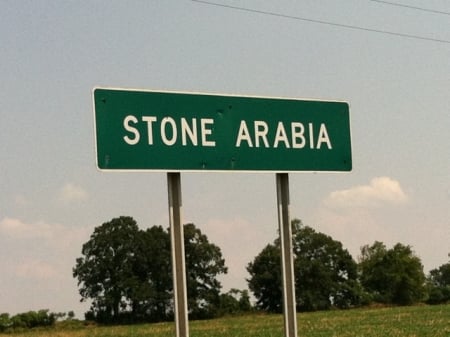 Stone Arabia and the surrounding areas are quite rural with rolling hills and beautiful vistas.  None of the Amish farm barns were painted. 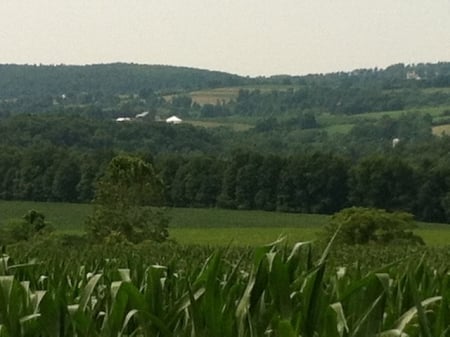 I don’t have a single picture of a buggy even though we went by many buggies as well as wagons. Many times we were the only car on the road and every Amish person we drove by raised a hand in greeting. 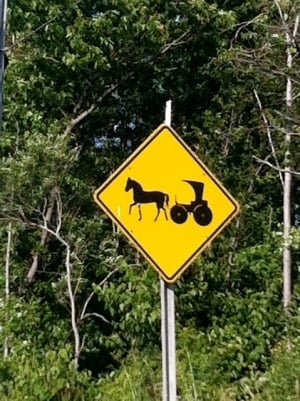 We did see some young boys (probably 10 – 12 year olds) driving wagons and farm equipment down the road. My 12-year-old was quite interested in that whole thing! It reminded me of one of the discussions from May that centered around child buggy drivers. Maybe the fact the the roads aren’t heavily traveled plays a factor in the age of the drivers. 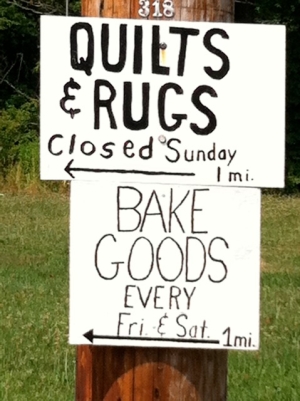 This family also sold quilts and rugs and I asked the girl if we could go up to the house to see the quilts. Let me start by saying that at 11:00 am it was already about 85 degrees and humid so when we pulled up 10 members of the family were enjoying the shade of the front porch. 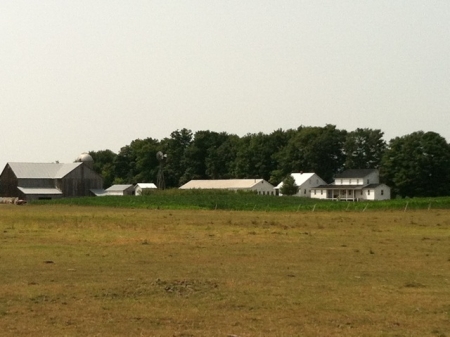 I had to laugh afterward because I have read about how people stare at the Amish (and that it is quite rude to stare!) but I must say that 20 eyes followed us to that shop! And 20 eyes followed us back to our car! And ten hands waved goodbye as we waved while we went past them on our way out! I felt like quite the oddity…that’s good…it keeps things in perspective. 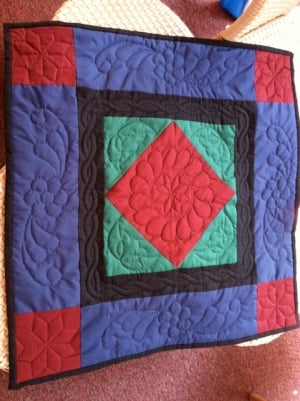 The quilt shop was a shed set back in the yard and, as my husband pointed out later, was absolutely spotless. The quilts were beautiful and quite out of our price range, so we purchased the quilted wall hanging above. My husband felt like we got a real steal at $60. The quilting is beautiful with the tiniest stitches I’ve ever seen. 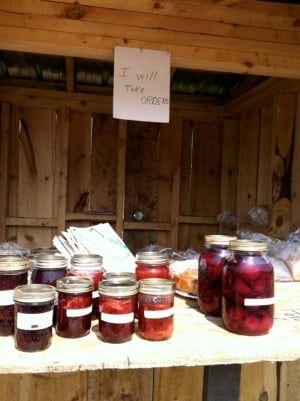 Most of the businesses in this area that we saw were home operated. Lots of shed builders, baked good sales (although we noticed that they seemed to stagger their days of business – one sign said baked goods sold Tues./Wed. and another was Fri./Sat. – I wondered if they did that on purpose) and the adirondack chair and hickory rocker builder (below). I ‘m sure if we had extended our drive further we may have come across others. 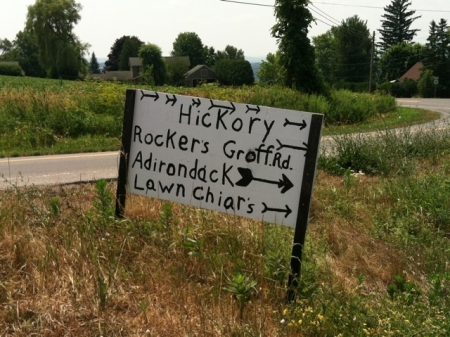 This farm was located next to the Stone Arabia Battlefield. The Battle of Stone Arabia took place during the Revolutionary War. A battalion led by Colonel John Brown of Pittsfield, MA were defeated by the British on October 19, 1780. The colonel is buried in the 18th century cemetery behind the historic Stone Arabia stone church that was built in1788. 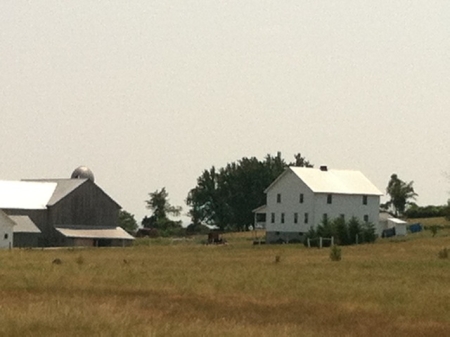 The buggy that is in the picture is similar in shape and style to the Nebraska Amish but with a tan top and brown bottom. The buggies were “open” with no protective front.

It was clear by the farms that they were very conservative. The one farm we went to I could smell a wood stove (unless you’re camping that smell is odd on an 80+ degree day – at least in my neck of the woods) and wondered if it was coming from the kitchen stove?