Conflict over the SMV safety triangle, which has seen numerous Amish sent to jail in Kentucky, has ended.

Atlee Miller, an Amish farmer from Franklin, said he appreciates the help from the state’s politically powerful to provide an exemption, but he said the credit really goes to a higher power.

“The man above has got control,” Miller said. “We thank him most of all.” 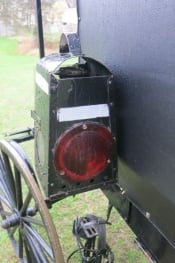 Buggies of the most conservative Amish in Kentucky will be outlined (backs and sides) in white or silver reflective tape, and will carry tape on the front left corner.

They will also display lanterns in a staggered arrangement (one a foot higher than the other).  Amish had begun implementing the new standards even before the law was changed.

It would be interesting to see a study in five years on how this affects accident rates.

Read more: Do all Amish use the Slow Moving Vehicle triangle?

Ethridge, Tennessee
1500 Amish in the Heart of the South
Amish in KY
Amish America
Get updates via: RSS