Who Put Up This “Anti-Rumspringa” Billboard?

It can now be seen on the edge of Shipshewana, the center of the northern Indiana Amish community where the arrests occurred:

Near the intersection of Hwys 5 and 20 (the main, very busy intersection as you enter Shipshewana from the south), I saw a large billboard that stated, “Parents, Rumspringa is not BIBLICAL. Stop the Tradition. Titus 2:11-13”. I stopped by the billboard to look at it closely and nowhere did it have a disclaimer on it which stated what person or what organization paid for it. I asked several local Mennonite and Amish people and none of them knew who paid for it.

Here is a photo, via Amish Workshops, of the billboard: 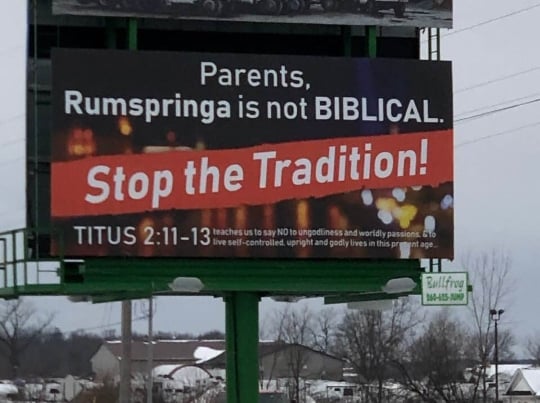 The small text below says: “TITUS 2:11-13 teaches us to say NO to ungodliness and worldly passions, & to live self-controlled, upright and godly lives in this present age.”

11 For the grace of God that bringeth salvation hath appeared to all men,
12 Teaching us that, denying ungodliness and worldly lusts, we should live soberly, righteously, and godly, in this present world;
13 Looking for that blessed hope, and the glorious appearing of the great God and our Saviour Jesus Christ;

The question of who is responsible for the billboard remains a mystery, as Al suggests.

Would an Amish person be behind it – say a concerned business owner and parent in the community?

I am doubtful of that. It doesn’t really have an “Amish” feel. I doubt that an Amish person would use the term Rumspringa in this way.

It seems the conceiver of this message is using the term “Rumspringa” the way an outsider might use it. That is, in the sense of the popular idea of this adolescent Amish period – as a stand-in for the wild behavior and partying like that seen in the recent police bust.

That would be as opposed to using Rumspringa to simply describe Amish youth in their adolescent years in general, the broader usage. So to me it feels like an outside voice.

One suggestion I’ve heard is that perhaps another non-Amish church has taken it upon themselves to send this message. 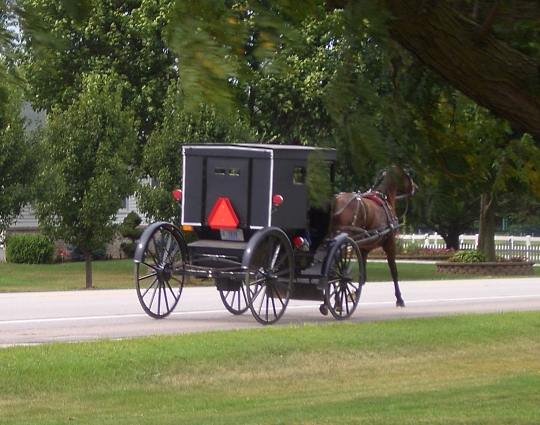 Does it matter who put the billboard up? Perhaps the person or organization wishes to remain anonymous.

Maybe it is a non-Amish church (perhaps one with some membership of former Amish) who sees what is happening in the community, and wants to send a message.

It seems non-Amish who live nearby aren’t comfortable with the big parties.

“It’s a little disheartening to know that that’s happening in our neighborhood so close to our home,” an non-Amish neighbor says about the party arrests, “especially with young children we don’t really want them to be influenced by that.”

On a related note, I wondered on the last post about parent-supervised activities in the Elkhart-LaGrange community.

Both Vanetta Chapman and Al in KY brought up The Cove, an Amish-run youth-oriented center in the settlement.

Al shares a description of The Cove:

In the November 2019 issue of “Connection” magazine, there was an interesting article about “The Cove — Plain Community Youth Center” in Shipshewana, written by Harley E. Yoder, manager of the center. The center has a gym area 110 x 100 feet; dining, lounge, kitchen and restroom area 60 x 80 feet, with total acreage of the center being 14 acres, including two softball diamonds. He stated, “The reason for The Cove is that we have around 3000 youngie um rumspringa (young folks in their teen years) in this community. We felt that there was a need for (a center) in this north central area to provide clean, fun things to do for the youth. Our mission statement: ‘we provide a safe and relaxed environment for our youth, where they can create friendships, memories, and practice God’s love’. The Cove is not trying to be a sports center, rather a facility surrounded by people concerned about our future, trying to give our young folks a place to meet and greet other young folks.”

Another person familiar with the venue adds:

The Cove is really nice, we were there a few months ago for an Amish art show. The place was packed with locals on a day when it was pouring rain, so packed we could hardly walk around.

The Cove sounds like a nice venue. I am curious how many of the 3000 youngie The Cove regularly attracts.

Going by the description of this one event it appears to be popular. This second source also adds about the nearby Centreville (St. Joseph County), MI settlement:

There’s a similar place up in St. Joseph County….It used to be called the M&M but the name changed recently.

There was also once another location called the 850 Center in the northern Indiana community, but it appears it is no longer functioning as a place for youth gatherings. It looks like The Cove has filled that role.

In view of today’s topic I’m republishing here one of my favorite posts on Rumspringa – a discussion of Rumspringa by an Amish father of six.

Do Amish parents encourage their children to “sample the world”? Is Rumspringa a time to decide whether you should join the Amish church or not?

He covers these and other questions in this succinct piece of writing, originally inspired by a talk that he gave to a college class:

And now turning to Rumspringa. I’ll try to recap what Rumspringa is and what it is not. What is mythical and what is reality. The reality is at the age of 16 the young begin attending youth gatherings. The purpose of these is to socialize with peers and to find a marriage partner. Once married this period of life is over. The myths are that Rumspringa is the time to decide whether you want to be Amish or not.

That choice is made sometimes earlier than 16 but not acted on until later in the teenage years, or sometimes when one fails to find a marriage partner that person gradually drifts away to another way of life. Then also sometimes the choice to leave the Amish is a result of a mid-life crisis of some sort–happening even after baptism and marriage.

The idea that parents encourage the youth to sample the world with the hope that this inoculates them against the world is very much a myth.

Amish parents like any other parents are very concerned about their children’s behavior and do everything they can to help the young make good choices. The youth are not encouraged to sow their wild oats. When a young person decides to be rowdy and engage in deviant behavior they are making a choice of their own. Certainly not at their parents’ behest or suggestion.

Although the degrees of parental resistance and correction vary some, poor choices and deviant behavior by the youth cause all parents anxiety.

Rumspringa is not a period of temporary freedom. Some of the young are baptized members of the church and as such are accountable for their behavior to the body of believers. This doesn’t mean their behavior is always perfect and always in the Ordnung but nonetheless they are responsible for their actions. Other youth are unbaptized and are not members of the church and as such are not accountable to the church. However they are the children of concerned parents and since the unbaptized are usually in their early to mid teens they are therefore still the responsibility of their parents, who are doing the very best they can to be good parents.

The youth are also learning about peer pressure, some of which is positive, such as that produced by girls seeking decent guys!! And then also some peer pressure as any American teenager knows is not so positive.

In spite of parents’ best efforts it seems the young everywhere sometimes only learn the hard way.