Thursday came and went, unsurprisingly, with no change in the stance of Amish in Graves County, KY over the SMV triangle.

So another group of Amishmen were sent to jail yesterday (looks like 10 this time, though it’s a little unclear from reports), with sentences from 3 to 13 days.

As with the Amishmen jailed last September, the men had refused to pay fines for failure to display the orange Slow-Moving Vehicle triangle.  A day in jail knocks about $50 off the fine owed. So with fines ranging from $153 to $627, you can see how the math works out. 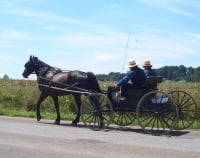 The Kentucky Supreme Court is meant to take up the Swartzentruber SMV issue this year.  Jacob Gingerich, one of the men sentenced, says that he wished the judge would have waited for the results of the Supreme Court case before sending them to prison (one consolation: the Amishmen won’t have their mug shots taken, as happened in September).

Sheriff DeWayne Redmon explained: “You get behind one of the buggies at night, you can’t see it…We’re citing them for their own safety as well as the safety of others.”  Read the rest here.

Barring help from the courts, the future of Swartzentruber Amish in Kentucky looks poor.  At least 3 Kentucky Amish communities are having problems, including settlements in Logan County and Grayson County.  It’s hard to farm from jail, much less live life in peace.

One thing I’ve wondered about is the lack of women charged in these cases.  Are women in these communities simply not driving as much, due to the threat of jail time?  Or perhaps what’s happening is that men take responsibility for non-payment as official owners of the buggies.