Amish involvement in the dog breeding industry has gotten a lot of attention over the years, in particular due to several highly-publicized cases involving mistreated animals. 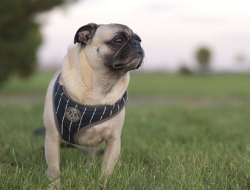 Amish are aware of the negative perception. The Lafayette Journal & Courier reports that Amish breeders in the Daviess County, Indiana community are cooperating with Purdue University’s Center for Animal Welfare Science to improve breeding practices:

“It was time that we as breeders recognize that there are professionals out there that can help us and we need to involve them in our businesses,” said Levi Graber, a member of Odon’s Amish community who helps several breeders in the area.

Graber contacted Purdue a few years ago to seek input on how to better meet consumer expectations. Then and started working with Candace Croney, director of the animal welfare center. Croney and a team of researchers started a pilot program to review how breeders run their facilities and whether certain changes could improve the physical and behavioral health of their dogs.

What exactly are those changes?

Some facilities’ dogs were really loud and many became over-excited when they saw people, which Croney said indicated they weren’t used to seeing people often.

The research team advised those breeders to make sure something positive happens for the dog, such as receiving a treat, every time someone comes into the kennel area.

They also suggested letting the dogs out in the yard daily to exercise and socialize.

The small changes made a big impact, Croney said. Over four months, the dogs in the kennel with the most behavioral issues became calmer when they saw people, and they physically looked better.

The goal is to make this a national program of science-based best practices.

I learned from the article that there is not a lot of research on dog care related to high-volume breeding. Agricultural economist Nicole Olynk-Widmar notes that people associate larger-sized commercial breeders with more problems.

If dogs require human interaction to be healthy, this would be an understandable assumption to make. Amish have large families which means more potential interaction. But it simply takes more time and manpower to handle many dozens of dogs versus just a handful.

It will be interesting to see what conclusions the program reaches. There is a demand for pet dogs that will be filled by someone. If Amish plan to continue in the business, improving standards and their reputation will be a plus for everyone involved, dogs included.