File this one under “Not A Spoof”. Chad Adams, a police sergeant for Pulaski Township in Western PA, recently spent time walking local roads dressed as an Amish woman.

Why would he do such a thing, you’re surely wondering?  The department was trying to catch a man who had been exposing himself to Amish children walking home from school.  Adams was accompanied by a female officer who also donned Amish garb to try to nab the perpetrator.

Pulaski Township overlaps part of the New Wilmington Amish settlement. The suspect is now believed to have been caught in a different county.

With the investigation ended, it can now be made public. Sergeant Adams did just that last week on the department’s Facebook page. 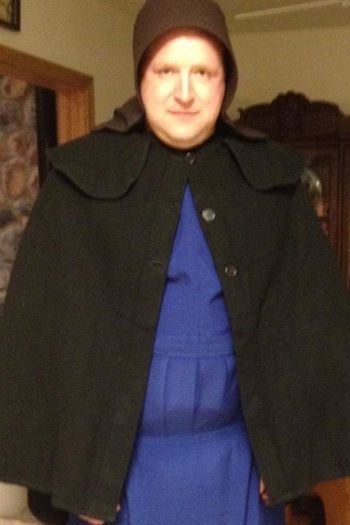 You might be curious to know if Amish were involved in the plan. Apparently so. According to New Castle News:

The police said they knew the man’s vehicle and followed him every day while he was going down the road and driving around, but they never saw him actually approaching anyone, Adams said. “We wanted to catch him in the act.”

The Amish parents didn’t want their children to testify in court. So, after a couple of weeks of surveillance, Adams asked the parents if he could use the women’s outfits.

“They agreed and set me up with something that fit. They had us hooked up with bonnets, aprons, dresses and shawls.”

He and the Wampum officer — with their duty belts, handcuffs and radios hidden — dressed in the outfits every day for a couple of weeks and would walk along the roads in frigid temperatures where the man had been seen.

“We figured if he was driving down the road and saw what he thought were Amish women walking he wouldn’t notice I was a guy until he got out of the vehicle,” Adams said.

In different circumstances, Amish would find men dressing as women absurd or offensive. Not in this case.

It’s too bad this had to happen. Nonetheless, good for the police taking such a creative approach to protect the innocent.