Lancaster County is (I believe) the only place* where you’ll see both gray-topped and black-topped buggies in the same community.

Black is easily the most common color for Amish buggies overall.

But the Amish in this best-known of all Plain communities actually drive the gray version. 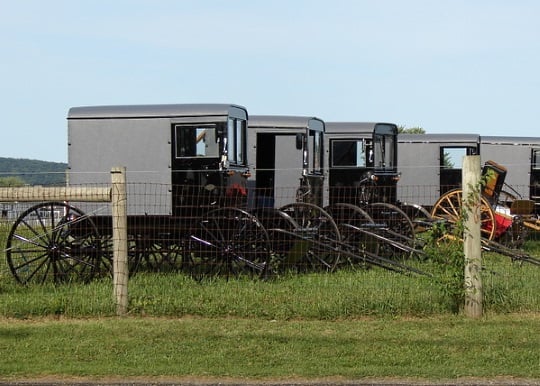 So who is holding the reins of the black top carriages in Lancaster County?

Those would be Old Order Mennonites (aka “Team” Mennonites), who also have a sizable population in the county, in its northern end. 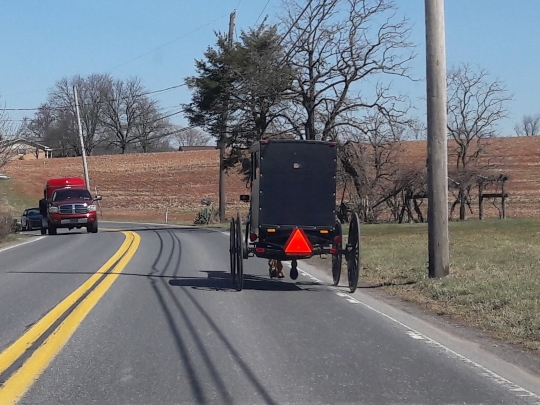 These Anabaptist cousins are similar in many ways to the Amish – such as in their choice to dress plain, their Pennsylvania Dutch language, and limits on technology.

Historian of the Amish Steve Nolt addresses this topic in the same Lancaster Online feature where he discussed Amish scooters.

So why do the Amish use gray and the Mennonites black?

Originally, the differences came down to what types of waterproof materials were available during initial buggy construction, according to Dr. Steve Nolt.

The most common color for waterproof fabric was bright yellow, so for many years, that was the default color of buggies, said Nolt.

In the early 1900s, buggy builders had more options for waterproof fabrics. Eventually, the Old Order Mennonites would decide on black, and the Amish would use gray, said Nolt.

“I don’t think we know with certainty why one group chose a black waterproof material and the other chose gray,” said Nolt. “Once established, each became a tradition.”

In other parts of the country, this may differ; Nolt said that in Mifflin County, one Amish group still uses the yellow fabric. Another group in the county uses white.

So as with a lot of things Amish, we don’t have a definitive answer why.

Perhaps there is no profound or even noteworthy reason behind the color choices. It just worked out that way.

*Update: I wrote that qualified opening line thinking I might hear from someone with info about another community or two where this is the case.

I was happy to hear from Steve Nolt, who writes to remind me of the situation in St. Mary’s County, Maryland – along with one, perhaps two other locations where black and gray buggies are seen on the roads together:

There are a couple other places where both black and gray buggies co-exist. Saint Mary’s County, Maryland is the one I think of first. There have been Lancaster Amish (gray buggies) there since 1940 and there are also Stauffer/Pike Old Order Mennonites (black buggies) there, too. The other place I think of is Buffalo Valley, Pa (Snyder/Union Counties) where Lancaster Amish and Lancaster OOMs live side-by-side.

One might mention Franklin County, PA, with Amish and OOMs from Lancaster County, but I’m not sure I would count Franklin County since the church communities, while being in the same county, are kind of geographically distinct.

Steve also shares the following additional info on the yellow buggy material. I’ve always found it fascinating that there are Amish who use this bright yellow material – and at one point in history yellow tops were seen outside of the Byler Amish churches:

Also, our historical data point for yellow buggies is Phoebe Earle Gibbons, a noted Lancaster County Quaker writer of the 19th century, whose 1869 book describes Lancaster Amish buggies as having tops of yellow oilcloth. The same yellow waterproof material was used to make 19th century raincoats, and created the stereotype of the ocean fisherman or lighthouse keeper in a yellow overcoat. Whatever the chemical composition, the waterproofing substance was a substance that could be added to fabric and still leave the fabric totally flexible. It’s final form left the resulting fabric yellow. My understanding is that the point was not to make fabric yellow; rather, the first chemical composition of the waterproofing agent simply left a yellow color. In time, by the early 20th century, scientists had devised other chemical formulas for waterproofing material that involved other colors.

A thanks to Steve for the helpful update here.