The Amish of Mechanicsville, Maryland

The Mechanicsville Amish community in southern Maryland was founded nearly a century later (1940) than the Oakland community.  But today it is much larger, consisting of 8 districts, with Amish residing in St. Mary’s County as well as in neighboring Charles County.

Amish parents, who had long sent their children to small public one-room schoolhouses, found themselves losing influence over the character of those institutions.  These issues reached a flashpoint in Lancaster County in the late 1930’s. 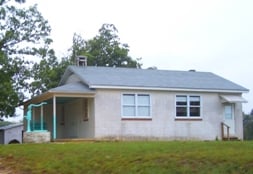 Today, the Mechanicsville community is one of the largest Lancaster daughter settlements.

Lay of the land

A large chunk of the Mechanicsville Amish community is found along Route 236, aka Thompson’s Corner Road, a short connector highway in St. Mary’s County.

Amish homes and farms line this two-lane byway.  There are also numerous dead-end side roads which peel off from 236 and go on for up to a couple miles, and which are heavily populated by Amish. 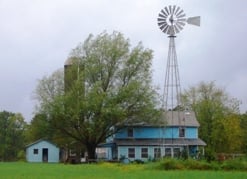 Amish homes are scattered about here and there in this community, interspersed with non-Amish residences in many places.  The homes here are not as wealthy-appearing as those in Lancaster.

And though there are land pressures, this area is definitely not as heavily settled as some others.  It seems Amish here could conceivably subdivide land and perhaps farm more intensively, or open more businesses.

There are quite a few farms in the community, with tobacco being grown by some Amish.  However, I am not sure on the quality of the soil.  Most Amish drives here were of a sandy rock mixture.  This may very well not be the best farming country.

Mechanicsville is not far from the expanding blob that is Washington, DC, which is of course a key reason for the land pressure.  There are some upscale developments in the area.

But there are many “backwoods feel” parts as well, and at least one swamp nearby.  Also, the Mechanicsville Amish have Plain neighbors nearby, with an Old Order Mennonite community located a bit further south near the town of Loveville. 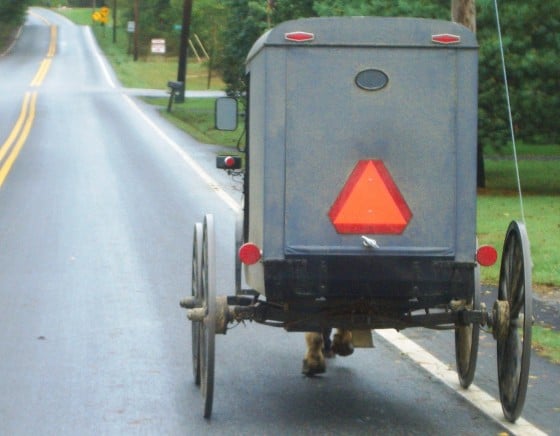 Mechanicsville Amish buggies are squat and feature small back windows

Buggies here are Lancaster grey, but seem to be “squatter” than those in the parent settlement.  You’ve also got a back window on many Mechanicsville buggies–both rounded and squarish–which is not the norm in Lancaster.

Like their Lancaster counterparts, Amish here operate a number of businesses.  While in the community, I stopped by some furniture shops, of which there are quite a few. I also saw shed makers, engine and harness shops, and many homes selling farm products.

It was quite a rainy day.  I asked one furniture shop owner if he appreciated the wet weather after such a dry summer.  “Well the farmers do”, he replied, which I took to mean him, not so much.

Despite the downpour, many Amish homes had laundry out, under porches in most cases.  One woman I met said she may need to visit the laundromat later in the day.  If you’re wondering, she probably wasn’t joking–some Amish do in fact use the coin-operated dryers at the laundromat, if one is nearby, as an emergency backup. 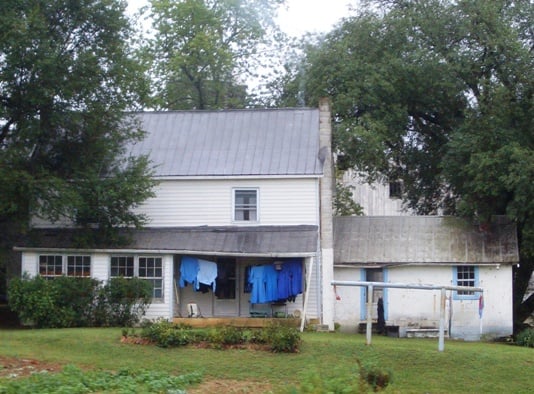 Porches come in handy if rain falls on laundry day

I also dropped into a couple of dry goods stores in the community, hunting for candles.  At the Locust Grove shop, I came up short–at least on “Amish-made” candles (there goes that “pull” of the “Amish brand” at work again–and no I am not immune either), though she had a number of factory-produced ones.

In the second place, Kurtz’s, I found what I was after–bona-fide “Amish” candles–and had a chance to speak with the proprietor, a middle-aged Amishman.  He noted the high land prices, and also how he dislikes traveling over the nearby Governor Harry Nice Memorial Bridge, which towers over the Potomac River and spans nearly 2 miles.

Later, when I left the community heading south, I found out what he meant–at a mere 2 lanes wide, it feels a bit tight and not especially nice up there on Governor Nice’s bridge, especially when you reach the roller coaster peak and peer over the side to the waters which seem like they’re about a mile down. 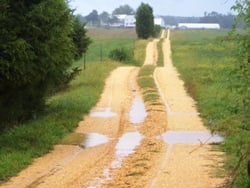 While at Kurtz’s, I also picked up an Amish directory for this settlement.  This was a new one, produced in 2010.

This directory had listings for communities in Pennsylvania, Virginia, New York, Wisconsin, and Illinois.   A glance through the book’s pages shows that Hertzler, Swarey, Kurtz, and Stoltzfus are among the most common names here.  No maps inside, though, which can be the case for some smaller communities’ directories.

Finally, I should note that Amish in the Mechanicsville community are quite tuned-in to their local markets.  This is the first Amish settlement in which I have seen a large number of business advertisements in Spanish. 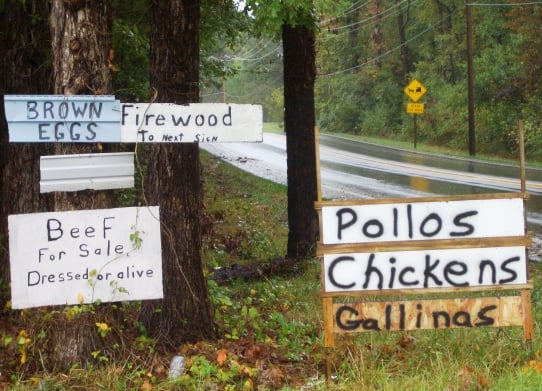 But what if I want my beef butchered and fully-clothed?

“Pollos”, “Gallinas”, and  “Queso” alert Spanish-speaking customers to the presence of chicken, hens, and cheese.  And “Cerrado Domingo” shows that the famous “No Sunday Sales” prohibition crosses language barriers as well. 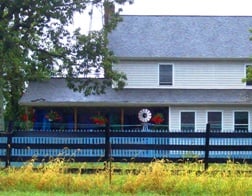 The “jam” in the jam sandwich

David Luthy quotes an Amish correspondent to The Diary, who wrote in 2006 that “St. Mary’s County reminds me more of a jam sandwich.  The outer layers consist of Washington, D.C. (large developments and housing complexes) with the Amish jammed in the middle.  Almost impossible to buy land from outsiders anymore.” (Luthy, Amish Settlements Across America: 2008).

Amish have different strategies for coping with land pressures.  Some sub-divide land, making 2 farms from one.  There is a limit to how many times farm acreage can be divided, though.

Others start small businesses requiring less land, or go into produce farming, which can make intensive use of small plots.  Still others react by moving to other communities or starting settlements elsewhere.  Amish in the Mechanicsville settlement have employed all three strategies.

Mechanicsville is a much less-known Amish community than some others, despite the proximity to a large population base.  Local Amish seem to get a number of tourist visitors however, from across the border in Virginia, for instance. 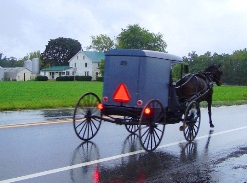 Will Amish buggies remain a common sight in this corner of southern Maryland?

Along with Lancaster County and the Dover, Delaware Amish community, Mechanicsville is one of a few truly “East Coast” Amish settlements, lying just a short drive from the Chesapeake Bay.  Like those other settlements, the Amish of Mechanicsville face land pressures due to the high population.

Some Amish settlements, faced with external or internal pressures, may stall out or even dwindle and eventually fail over time.  It remains to be seen whether the Mechanicsville community will withstand population pressures or decrease over time due to emigration or other factors.

Read more on other Amish communities in Maryland.