A Lancaster County Amish farmer faces hundreds of thousands of dollars in fines and potential jail time for repeated violations of food safety laws. Miller’s Organic Farm, owned by an Amos Miller in Bird-in-Hand, has been described as “tangling with federal authorities for several years over its food handling practices” in this report by Fox43:

U.S. District Judge Edward G. Smith, Jr. found Amos Miller in contempt of court for violating a 2020 consent decree and ordered him to pay $250,000 in fines, plus an additional $14,436 to cover enforcement costs.

The original violation in this case occurred in 2015, and according to what the government alleges, had serious – that is, deadly – consequences:

The Food and Drug Administration (FDA) found listeria in the farm’s raw milk in 2015 after raw milk sickened two people, killing one. Through genetic testing, the FDA identified the strain of listeria as genetically similar to the strain that sickened the people, leading the FDA to conclude that Miller’s milk was the “likely source” of the bacteria.

The illnesses actually happened in 2014, with a person in Florida dying. Miller has objected to this conclusion:

Miller told FOX43 his milk was not proven to have caused the illnesses, and that the person who died had pre-existing conditions.

“Her family is very upset that FDA and USDA is using her case to make us look bad,” Miller said. 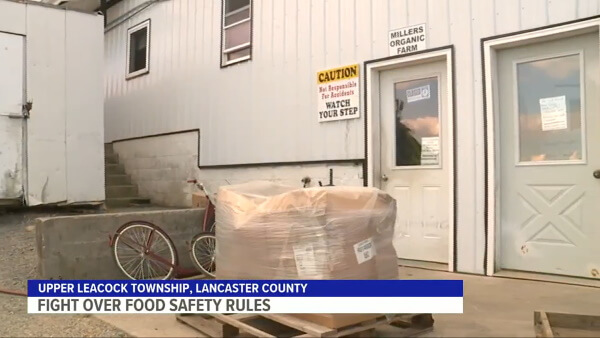 More on the complaints against Miller:

The Department of Justice has filed several lawsuits against Miller and the farm, including a 2019 suit that ultimately won an injunction to cease violating food safety laws.

In 2020 Miller signed a consent decree acknowledging he violated the injunction.

Miller was found in contempt of court on June 16, with a 39-page-ruling published on June 22 that detailed Miller’s interactions with FSIS agents.

Falling under the umbrella of the U.S. Dept. of Agriculture (USDA), the Food and Safety Inspection Service (FSIS) is tasked with ensuring meat and poultry sold commercially is safe, wholesome and correctly labeled and packaged.

“To date, Mr. Miller’s actions call into question his motivation to continue to pursue with FSIS a plan for custom-exempt operations…”

Food Safety News gives further background and a rundown of the events surrounding the violation (they’re against Amos Miller in this case).

On the other hand, Miller has his defenders, including in his sizable “buyer’s club”. A buyer’s club is a way to get around some restrictions on selling raw farm products in some places, allowing product providers to avoid licensing and inspection.

Miller’s Organic Farm buyer club has more than 2,000 members. Some are calling for the sanctions to be reversed.

“I think if we stand together, the government does feel that pressure,” Miller said.

A GoFundMe page has raised nearly $14,000 to help pay the fine. That may not be enough, though.

Also on the pro-Amos Miller side, another defender argues that Miller’s products are in high demand and profitable for him, and that the government doesn’t like that.

Miller seems to be presenting the issue as one of keeping his people on the farm rather than out in other occupations, which is a classic argument that resonates with Amish and no doubt with sympathetic observers:

“[I’ll] do do whatever it takes to keep our children on the farm rather than going out into the world looking for jobs, which can not be good in our culture,” said Miller, who is Amish. “If we have to pay it all ourselves, very likely we will not be able to move forward.”

He explains that he is “willing to take a stand to preserve our culture” in this video:

Fair enough, though many other Amish farmers are able to keep on the farm without the troubles Miller has been through. Operating a conventional dairy for example is probably an easier way to keep the children on the farm in light of the trouble that Miller’s practices have brought upon him (not to mention the person who died, assuming it was in fact Miller’s milk that caused it).

However, Miller “believes many federal regulations lead to food being more unhealthy” and I would gather there’s little chance he would switch his operation to a conventional one which adheres with conventional regulations:

Miller’s Organic Farm’s practices are organic, non-GMO, chemical free, hormone-free and antibiotic-free, according to its website.

“[The cows] get sunshine, they get green grass. If the animals eat good then we can eat good as well,” Miller said. “They use it as their medicine.”

In the video above Miller elaborates that his customers “use it as a medicine. It’s very healing to the body because it’s raw,” along with further explanation of how his practice is superior to conventional treatment of livestock.

Is Miller being unfairly targeted as he alleges? He suggests that even the family of his victim feels that he is being mistreated in this case. This case raises the question of how we draw lines when it comes to personal freedom and public safety. It’s also not the first controversial raw milk case involving Amish, though it might be the first where someone is alleged to have died from an Amish raw milk source (and noting that Miller’s case involves not only raw milk, but slaughtering and other meat processing practices).