Stutzman gained notoriety after his nine-year old son’s body was found frozen in Nebraska in 1985. 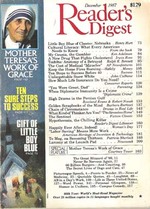 Stutzman was never convicted of murder in that case, only of lesser charges.  He was also suspected in his wife’s mysterious death in a barn fire, as well as in two other deaths.

Stutzman was sentenced for the 1985 killing of a Texas man, and served thirteen years.

‘Little Boy Blue’ was the nickname given to the unknown boy by local residents.

The case got a lot of attention.

Reader’s Digest covered it in a story in 1987. A book, Abandoned Prayers, by crime writer Gregg Olsen investigated the case in great detail.  Another, shorter account of it can be found in Dorcas Sharp Hoover’s House Calls and Hitching Posts.

Violent crime–and non-violent crime, for that matter–is so unusual among the Amish that any time it happens, it’s bound to get attention.

When you are dealing with a people that as a whole are exceptionally peaceful and law-abiding, violent individuals and miscreant behavior stand out even more.

The Amish know that just being Amish is not a free pass.  The individual and the decisions he makes are what count.  They acknowledge that there is good and bad behavior within their own communities, just as the same is true in the modern world.

They also realize that by virtue of the way they live, the spotlight is on them even more.  The Eli Stutzman story, as well as being tragic and unfortunate, is an extreme example of that.