ATF Seizes Guns From Lancaster Amish Farm; Owner Was Selling Without A License

An Amish dairy farmer illegally selling firearms? A surprising story last week told of a Lancaster Amishman having an unspecified number of guns seized by ATF agents from his farm. From Lancaster Online:

Agents from the Bureau of Alcohol, Tobacco, Firearms and Explosives seized firearms from a Leacock Township property earlier this month and an Amish farmer at the property acknowledged selling guns without a federal firearms license.

No criminal charges have been filed so far in the matter, and there is little information provided by ATF sources. LNP | LancasterOnline learned of the raid from a tip.

Cucinotta said there was little else he could add because of the ongoing investigation.

On Tuesday, Reuben King said the guns taken were part of his personal collection and that the foundry had nothing to do with the gun sales.

“I’m not going to deny that I was selling some,” Reuben King said. Gun sales were not advertised and he does not know how he may have come to the ATF’s attention.

“This is my business: I’m a dairyman,” he said inside a barn filled with cows as he swept the concrete floor with a pushbroom. He has about 50 dairy cows.

Rueben King said he primarily sold long guns to the Amish for hunting, though he admitted he sold some to non-Amish, too.

“I was not dealing in handguns, positively not,” Rueben King said.

So on the one hand this headline gets attention because when you see “ATF agents” and “seize guns” it sounds like something pretty bad was going on. Especially coming on the heels of the odd story of an Amishman in Tennessee selling marijuana and having a cache of weapons seized by authorities (this story apparently has nothing to do with drugs, however).

But on the other hand, wait a minute – Is this finally some concrete evidence of the fabled Amish Mafia coming to light? (wink and heavy sarcasm applied here, if it’s not obvious)

Returning to seriousness, I can see this sort of thing happening. Amish certainly own firearms, primarily for hunting and farm maintenance purposes. They buy their guns in different places but they have one specific obstacle that makes it harder for (some of) them (more on that below). By way of example, here is a photo of an Amishman perusing guns for sale at an auction: 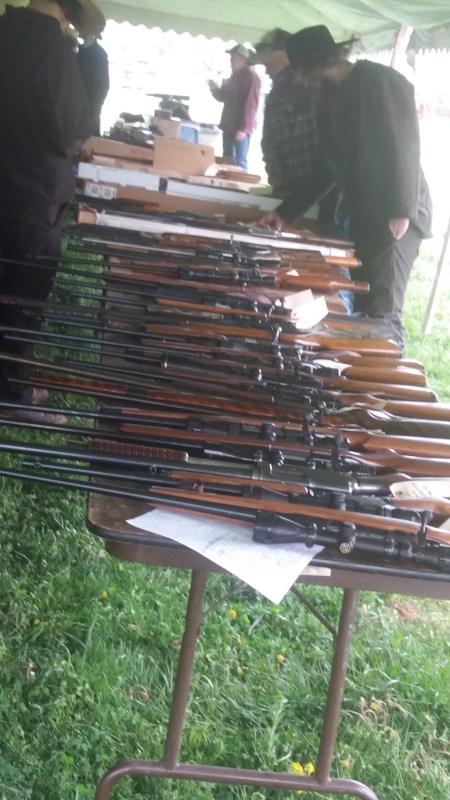 So this Amishman took to selling hunting guns mainly, providing them both for those in his community and outside it (non-Amish).

I do find it a little strange that according to the article “he had declined to say how many guns he had or sold, but that more than 600 — which is what a tipster told LNP — didn’t sound right.” He also added that agents didn’t take all of his guns, that he hunts and that he’s been a gun collector over the years.

There also appear to be two gray areas or complicating factors here.

Here’s the first one – on defining the business of “dealing in firearms”:

Reuben King pointed out that the government can’t tell him how many guns a person may sell or over what timeframe before a license is required.

Cucinotta reiterated on Tuesday that he could not comment on the case at hand, but would refer anyone with questions about federal firearms laws to the bureau’s website.

A 15-page document posted to the bureau’s site and titled, “Do I need a license to buy and sell firearms?” states that the federal Gun Control Act “requires that persons who are engaged in the business of dealing in firearms be licensed by the bureau.”

“Determining whether you are ‘engaged in the business’ of dealing in firearms requires looking at the specific facts and circumstances of your activities,” the document said, noting no federal law sets a “‘bright-line’ rule for when a federal firearms license is required.”

The ATF document says a person “will need a license if you repetitively buy and sell firearms with the principal motive of making a profit.” Licenses are not required for someone who engages in “occasional sales of firearms from your personal collection,” the document added.

The amount of guns being sold and frequency of sales seem to be the sticking points here with what looks to be intentional gray area in the ATF document. That’s where the lawyers make their money, I suppose – but why not just clearly define it?

I would guess keeping it “gray” and based on individual cases leaves them more latitude for when they want to bring a case against a “bad guy”, perhaps when working against gangs and criminal rings. Maybe in cases where they have no other charges they can bring, but if they can argue someone was illegally dealing firearms based on just a few sales (by definition, if you do the same action just twice, you have repeated it), they can use that to lean on an individual to compromise his bosses and move up the chain.

The key words I see are selling “repetitively” vs. “occasional” selling. If it is more than 600 guns, it would be hard to argue “occasional”. Knock a zero off of that, and spread it out over 5-10 years, and you have more of a case.

If it wasn’t obvious though, I’m not a lawyer. So I’ll turn back towards a more Amishy angle of this story. 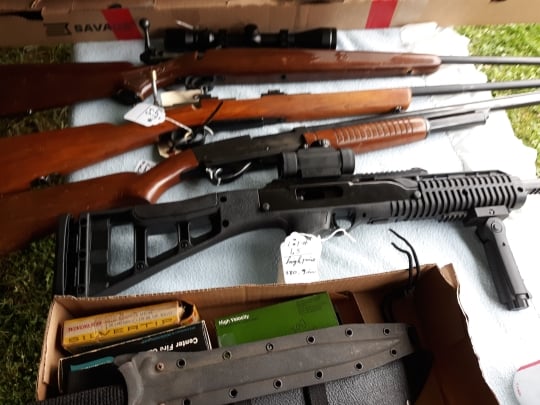 Guns for sale at another auction. NOT the guns referenced in this story; illustrative purposes only. Photo by Jerry

The second potentially complicating factor is possibly that the Amish have some sort of religious argument due to the photo requirement. I’m not suggesting it would justify doing something counter to the law, but there is that element out there that might come into play. This is the relevant bit from the article:

This would more explain a reason why Amish buyers went to King to buy firearms. Maybe it started as one or two sales to family or church neighbors, and word got out, as it swiftly does within Amish communities, that King was someone you could go to to get a gun. It’s unclear where he was getting his guns, but perhaps King had no qualms about having a photo ID (a number of Amish don’t have an issue with it) so he could serve as a source for those Amish who were stopped from buying at licensed dealers due to the photo requirement.

Again I don’t see this as a justification for thwarting legal requirements, but it might be an argument that could help him gain some leniency if he faces charges. He provided a service for Amish who had to avoid buying from licensed dealers due to the photo requirement. The service he provided grew larger than he perhaps first intended.

That’s some sort of argument I suppose. In any case it sounds like King is considering finding a lawyer.

That sounds like a wise move as he potentially faces serious punishment. Lancaster Online pulls the part about penalties from the ATF doc: someone who “willfully engages in the business of dealing in firearms without the required license is subject to criminal prosecution, and can be sentenced to up to five years in prison, fined up to $250,000, or both”.