I don’t know if the video I just watched-entitled “Amish Smugglers’ Shady Milk Run”–was intended to be funny, but I couldn’t help but chuckle.

Technically, I guess you do call someone who brings in product to sell in an area where it is illegal a “smuggler”.  But the term is such a loaded one.

The quote in the video from the FDA (“Raw milk is inherently dangerous…it should not be consumed by anyone at anytime”) makes it sound like raw milk is a toxic substance that will make you grow a third eye or turn your skin purple. 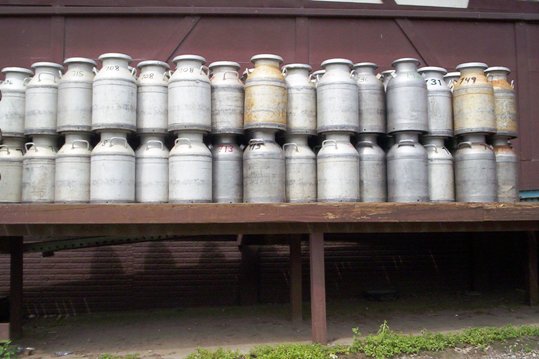 There may be legitimate health concerns.  I don’t mean to diminish those.  But I think that most raw milk drinkers would find the tone of the video laughable.  The narrator’s voice is borderline campy (was it meant to be?).  He makes it sound as if he is trailing a Colombian drug cartel and not a man selling a product people put on cereal.

So if there is a serious point here, it seems a bit oversold.  Maybe I’m off here.  You can be the judge.  The video is here (no longer online).

However,  the fact remains that selling raw milk is illegal in some places, so I guess he is on to something.  As the companion article states, “According to the agency, from 1998 to 2008, raw milk consumption was responsible for 1,614 illnesses, 187 hospitalizations and two fatalities.”

I drink raw milk often when I visit Amish.  In fact, I’ll be drinking it next week while staying with Amish friends in Lancaster County (not “Isaac” or “Samuel” from the video).

Raw milk tastes pretty good.  I don’t know about health benefits.  I was also unaware of the threat of stomachaches, mentioned in the accompanying article.  Perhaps our author is lactose intolerant.  Perhaps it is rougher on the stomach than I am aware. 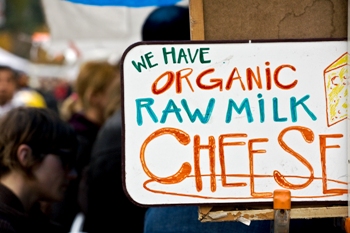 Raw milk remains a flashpoint issue.  Raw milk sellers have been raided, arrested, and fined.  But there is a market that wants it, despite the alleged risks.  In the case of this news story, that market is found among “foodies” of New York, the final destination for the Amish smuggler’s product.

Anyone else have experience with raw milk?  Is it dangerous?  Should we be allowed to buy it?

And more importantly–should I bring my own gallon jug next week, or stick with the straight-from-the-cow version?
Photo credits: milk cans-Wahig; raw milk cheese-niznoz