One thing you notice right away if you visit Lancaster County for the first time–especially when comparing it to just about any other Amish settlement–is how congested it is. 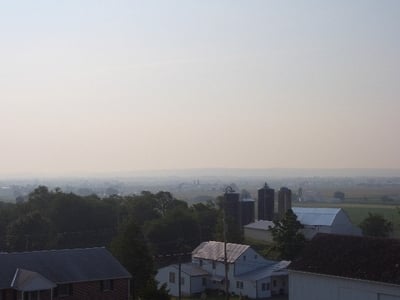 There are a lot of people in what is supposedly a ‘rural’ county–nearly half-a-million.  Some time ago, locals became concerned with what would happen if land pressures eventually caused the ‘garden spot of America’ to end up just like any other patch of suburbia.

A combination of government and private groups today work to preserve the rural character of the county.

One way is by buying, then retiring, development rights to farmland.  This assures that farms, some of which were acquired directly from William Penn, will not be transformed into cookie-cutter developments, a process evident in many parts of the county already.

Thanks to David Carrig for the link to a Philadelphia Inquirer article on how Lancaster and Chester County Amish community have dealt with the issue of farm preservation (no longer online).

Despite some initial reluctance to ‘getting something for nothing’, a lot more Amish have signed up and transferred development rights to the trust.  As it says in the article, some are starting to see it as not only preserving the land but also the Amish culture.

One thing’s for sure.  With rights to some farms selling in the hundreds of thousands of dollars, it’s not a bad time to be a landowner in Lancaster County.