The concept of “Amish community” has a number of meanings

Sometimes the term is used appropriately, ie “My friend Lavern comes from the Nappanee Amish community”. However, describing Amish as belonging to one “community” may mean ignoring the sometimes great diversity and differences between groups.

Amish from one background may have differing opinions and approaches to daily living than Amish in another set of circumstances.  Differences may be subtle, or more profound.  When discussing the Amish, distinguishing just what we have in mind can be important. 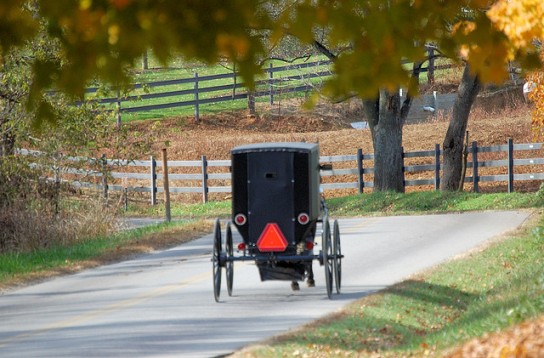 Heading down the road in the Amish community at Adams County, Ohio

Among other reasons, the question of diversity is relevant as assumptions are often made by non-Amish about all Amish based on the experiences with one group.  This can lead to misunderstandings and in some cases conflict between Amish and non-Amish.  In New York Amish, Karen Johnson-Weiner shares examples of difficulties encountered by Amish immigrants to the Empire State, particularly those from more conservative groups.

For example, compared to their New Order or Old Order Amish counterparts, highly conservative Swartzentruber Amish typically have different viewpoints and practices in areas such as health care, technology, participation in politics, mission and charitable work, and even what books are appropriate to have in one’s home or whether automobile transportation from non-Amish is acceptable.

Members of more conservative Amish groups have come into conflict over issues such as building codes or SMV triangles, raising objections that most other Amish would not, and sometimes perplexing non-Amish neighbors.

A more useful term when discussing “the Amish” as a whole might be “Amish society”, which has a broader scope.  “Amish society” can be used to take in a full range of Amish groups, some with differing practices and even beliefs,  just as the term “American society” takes in a broad swathe of cultures and diverse groups.  We can talk about and even make a few generalizations about “Amish society” and effectively refer to a much larger group of people.  John Hostetler likely realized the suitability of the term when naming his landmark 1963 book Amish Society.

However the concept of Amish community is in fact a valid one, and can be used to represent a few concepts.  For instance, “Amish community” is often used as a synonym for an Amish settlement, which is the geographical location where a group of Amish live.

The settlement may be made up of culturally and theologically similar Amish, or it may include diverse groups.  For instance the sizeable Amish community at New Wilmington, Pennsylvania,  is comprised more-or-less of one main “flavor” of Amish.  On the other hand the nearby settlement at Holmes County, Ohio consists of 4 main groups, and nearly a dozen tribes when broken down further into subgroups.

Amish at New Wilmington, PA are marked by their brown-topped buggies and conservative practice

Pennsylvania is home to over 50 settlements, scattered across the state, ranging from highly progressive to highly conservative groups.  Family, business, and other ties may link Amish in one Pennsylvania settlement to those in another–a Lancaster Amish person may have a sister living in neighboring Lebanon County, and a business partner in another Amish settlement in Central PA–but the idea of a uniform Pennsylvania Amish community is misleading.

“Lancaster Amish community” is a much more relevant term, as the Amish living in the geographically well-defined region of Lancaster County are for the most part similar in cultural practice and religious belief (though even in this community there is variation, i.e. in level of technology permitted), deal with similar local issues, and feature tight kinship bonds which link families and churches across the community.  These factors all combine to make the idea of a “Lancaster Amish community” make much more sense than that of a “Pennsylvania Amish community”.

Next, “Amish community” may be applied to the concept of an Amish affiliation.  Affiliation is a term used to describe Amish with similar practices that are also in fellowship with one another.

Being in fellowship means that Amish groups may exchange ministers and intermarry.  Affiliations may be spread across great geographic distances.  For example, members of the Andy Weaver Amish affiliation can be found in both Ohio as well as New York.  Conservative Nebraska Amish, who drive white-top buggies and follow a strict Ordnung, live primarily in Pennsylvania, with a small community in Ohio.  Amish from the New Order affiliation are found in around a dozen states.  A single comprehensive New Order Amish church directory is published, taking in settlements in many locations.  A member of a given group may feel a special sense of community with other members of his affiliation, even across distances.

Yet even within blanket group terms such as these, there can be differences and division.  For example, the Swartzentruber Amish consist of three separate non-fellowshipping groups, a result of internal divisions occurring over the past two decades.  New Order Amish are divided into so called “electric” and “non-electric” groups, reflecting the decision of some New Order Amish congregations to permit use of public electricity.

Although they may be part of a larger “Amish community” in the “settlement”, and “affiliation” sense, and even part of the local community which would include non-Amish neighbors and friends, the people in one’s church district often form the closest personal and spiritual ties for Amish. 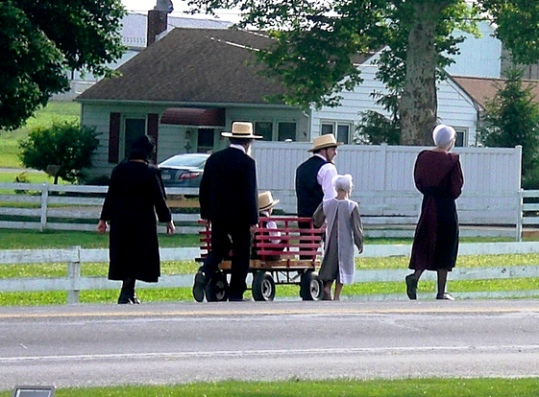 Amish keep church districts small, periodically dividing them and creating new congregations, in order to better live out a Christian concept of a brotherhood of believers.  Living and worshipping with like-minded others in close community allows Amish to put Christian principles and values into practice in the day-to-day.

Amish tend to know the people in their own church communities best.  In larger Amish settlements, Amish tend to know the families they worship with, close neighbors, their personal family, and business or work ties.  Unless linked by such connections, Amish from one geographical area of a community numbering 10 or 20,000 individuals are not necessarily likely to know counterparts in another area–imagine being expected to know all of the families and individuals in your 20,000 person town.

Even the Amish, with their networks of connections and emphasis on face-to-face interaction, are challenged to “keep everyone straight”.  Nicknames and church directories can be useful.  However, maintaining the basic unit of Amish community, the church district,  as a small body ensures that Amish maintain meaningful close ties and provides an environment which Amish feel is well-suited to living out a Christian life.

Interestingly, certain sociological concepts seem to back this Amish practice of worshipping in tight-knit community.  Dunbar’s number refers to the number of individuals one can be expected to maintain workable social relationships with.  British anthropologist Robin Dunbar proposed that this number is connected with the size of the neocortex, an area of the brain, and thus the human capacity for maintaining social ties is limited.

Intuitively, the idea makes sense.  Limited time, energy and other resources means that cultivating and maintaining thousands or even hundreds of relationships is simply not possible.  The figure given as Dunbar’s number may range from 100 to 250, but is commonly cited as around 150–which happens to be roughly the average size of an Amish church district when including baptized and unbaptized individuals. 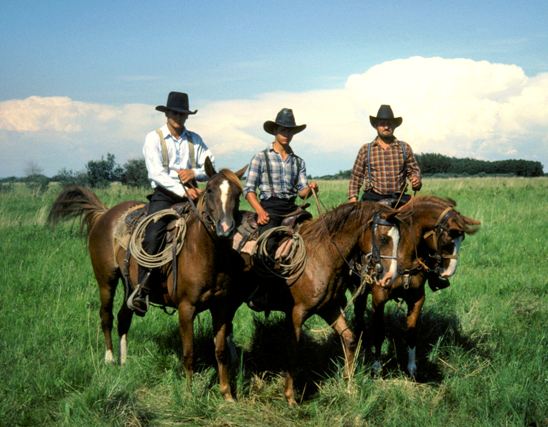 Hutterite communities follow a similar size guideline.  In Malcolm Gladwell’s The Tipping Point: How Little Things Can Make A Big Difference, a Hutterite leader comments that  “Keeping things under 150 just seems to be the best and most efficient way to manage a group of people…When things get larger than that, people become strangers to one another.”

Gladwell notes that this practice is an intuitive one that has been around for ages, not one the Hutterites, obviously, picked up from poring over evolutionary psychology studies to determine the optimum number of individuals.

The Hutterite leader goes on to explain that “In smaller groups, people are a lot closer.  They’re knit together, which is very important if you want to be effective and successful at community life…If you get too large, you don’t have enough work in common.  You don’t have enough things in common, and then you start to become strangers and that close-knit fellowship starts to get lost.”

Approaching that upper limit can result in natural subdivisions, according to the Hutterite informant, who has seen it occur: “What happens when you get that big is that the group starts, just on its own, to form a sort of clan…You get two or three groups within the larger group.  That is something you really try to prevent, and when it happens it is a good time to branch out.” (The Tipping Point, Malcolm Gladwell, p. 181) 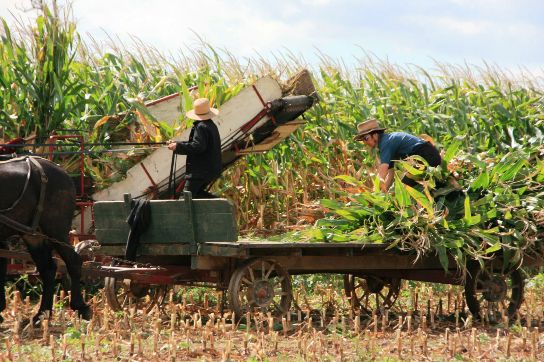 Amish seem to intuitively “get” the same concept, with most church communities preparing to divide on approaching 35-40 families in size.  As congregations get larger, closeness of community can be weakened, as well as creating challenges for leadership in “caring for the flock”.

Amish life is based in community

“Amish community” is a concept that is sometimes incorrectly used.  “Amish community” may be accurately used in reference to a specific geographical settlement.  Community may also be taken to mean those Amish comprising an affiliation, or a group with similar practices and beliefs.

Perhaps the most important meaning of “Amish community”, however, is in the sense of the local church congregation.  Living and worshiping in a tight-knit environment helps the Amish foster close ties, which promote Christian living and enable social support.

Amish and related religious groups feel community is best realized in these small groups, and thus take proactive steps (even a year or more in advance), to prepare for the creation of new units of community.  These include ordaining new ministry to lead the new church district when division occurs.